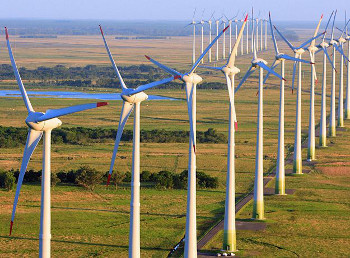 Renewable energy investments in Brazil nearly doubled in 2014, helped by hydropower, wind and bioenergy projects, a new report has found.

Spending on Brazilian renewable power and fuel initiatives rose to $7.6bn from $3.9bn a year earlier, according to the 2015 Global Status report by the Renewable Energy Policy Network for the 21st Century (Ren21).

The South American powerhouse was ranked in the top five in half of the 10 renewable energy segments measured for new investments in 2014, the news report added. Brazil was second in hydropower, fourth in wind, third in solar water heating, second in biodiesel production and second in ethanol output.

The report said: “Despite rising energy use, for the first time in four decades, global carbon emissions associated with energy consumption remained stable in 2014 while the global economy grew. Whereas previous emissions decreases were associated with downturns in the global economy, the carbon stabilization in 2014 has been attributed to increased penetration of renewable energy and improvements in energy efficiency.”

Climate change commitments made by China, Mexico, the US and the European Union would “set the stage” for future investment in renewables, according to the report.

The findings follow a previous announcement that Brazil has held several renewable energy auctions in the past months. One of the most important, the country’s first solar power auction, awarded 500 MW in solar projects.

Brazil has a significant dependence on hydropower plants and needs to diversify its energy mix, especially because of the droughts that affect the country.

The last renewable auctions held in Brazil totaled 1600 MW. Apart from solar projects, wind projects have also been awarded. Planned wind projects plans amount to a capacity of 769.1 MW and must be operational by early 2017.

The Brazilian Wind Energy Association (ABEeólica) announced recently that investment in wind power projects in the country will reach $14,782m between 2015 and 2018. Brazil is expected to produce over 7200 MW from wind by 2018.

ABEeólica officials have said the country’s investment in wind farms in 2014 will surpass $7.6bn. There are currently 202 operational wind farms in the country, and another 378 are under construction.

ABEeólica predicts that there will be over 280,000 Brazilians working in the wind sector by 2020.

Brazil’s National Electricity Regulatory Agency, the country’s energy market watchdog, has allowed the company Usina Santo Angelo to begin commercial operations of a 40 MW biomass-fired plant. The plant is located in the state of Minas Gerais and includes a 10 MW unit and a 30 MW unit. The plant is fueled by sugar cane bagasse.

The regulator has also authorized Alupar Investimento to begin test operations for its Ferreira Gomes hydropower plant, expected to reach 252 MW once construction is completed.