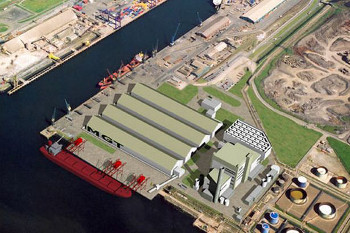 The world’s largest biomass combined heat and power (CHP) plant is set to be built in the UK.

The 299 MWe/299 MWth Tees Renewable Energy Plant, to be located in the Port of Teesside in Middlesbrough, is planned to export its power and heat to nearby industrial users and consumers. It will burn imported wood pellets and chips from certified sustainable forest resources in the US and Europe, its developers said.

Scheduled for completion in July 2018, the plant is expected to power around 600,000 households, and to cut 32 million tonnes of carbon emissions over its 30-year operational life.

Abengoa has been named as the engineering, design and construction company on the over €600m ($660m) project, working for project owner MGT Teesside, a subsidiary of MGT Power which specialises in developing utility-scale biomass CHP projects.

The project was granted state aid approval by the European Commission in January. At the time, then-energy secretary Ed Davey said: “By bringing together combined heat and power and [a] biomass plant, MGT estimates that this plant will create 750 construction jobs and 150 permanent jobs on Teesside, as well as cutting Britain’s carbon emissions.

“Renewable electricity generation has been booming across the UK, and we are seeing record levels of renewable investment. Teesside is now well placed to be a major hub in this future green economy.”

In late 2014 Abengoa was awarded a contract to build a €315m, 215 MW circulating fluidised bed (CFB) biomass CHP plant in Ghent, Belgium. At the time, that project was the world’s largest biomass CHP plant.