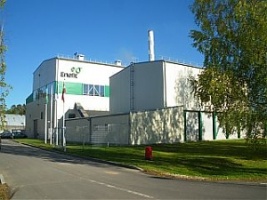 Estonia’s Eesti Energia SA started operating a biofuel-based combined heat and power (CHP) plant in Latvia earlier this month, its first such plant outside of its borders.

The new cogeneration plant, situated in the northern city of Valka, produces 2.4 MW of electricity and 8 MW of heat.

Eesti Energia operates existing heat production facilities in Valka, which lies on the Estonian-Latvian border, and has been selling electricity to Latvia since 2006.

New data, complied by the Central Statistical Bureau of Latvia, show that in 2012 there were 133 active CHP plants with a total electrical capacity of 1021 MW.

This represents more than a 60 per cent growth in the number of cogeneration plants compared to 2011.

Although natural gas continued as the dominant fuel source for the combined generation of heat and power, it fell from 92.3 per cent in 2011 to 85.7 per cent.

Meanwhile, the number of CHP plant fuelled by biogas rose an impressive 120 per cent between 2011 and 2012.