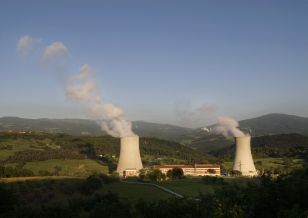 A biomass power plant has been added to an existing geothermal plant in Italy, creating what may be the world’s first hybrid power system featuring the two technologies.

Developer Enel Green Power announced this week that construction has been completed on the 5 MW biomass plant, which will be used to heat geothermal steam at the company’s existing 5 MW Cornia 2 plant in Tuscany.

The biomass facility, which the firm said represents an investment of over &euro;15m ($16m), is expected to increase the geothermal plant’s output by more than 30 GWh per year and reduce its annual CO2 emissions by over 13,000 tonnes.

The new plant will be fuelled by virgin forest biomass sourced from no further away than 70 km, Enel said. It will be used to heat the steam entering the geothermal plant from an initial temperature of 150°C-160°C to 370°C-380°C.  This will increase the plant’s net power generation capacity, Enel noted, due to the increased enthalpy of the steam, while lower moisture levels during generation are expected to improve the efficiency of the cycle.

“The integration of different technologies is a major step forward for the future of renewable energy,” said Enel Green Power CEO Francesco Venturini. “This plant, like our Stillwater facility in the US, which combines the continuous generation capacity of medium-enthalpy, binary cycle geothermal technology with solar thermodynamic, and the Fontes Solar facility in Brazil, which integrates solar photovoltaic with wind while also using a stand-alone solar photovoltaic plant to reduce the consumption of [the] Apiacas hydro plant construction site, will enable the optimization of results and represents a replicable model that opens up new local energy, economic and employment opportunities.”

The company said the new plant will create 35 to 40 direct and indirect jobs involved with sourcing the local biomass.