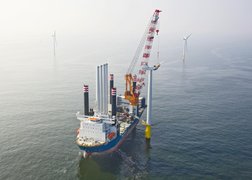 Van Oord is awaiting the formality of clearance by the German competition authority before the deal is finalised.
The company also announced plans to modify its installation vessel Aeolus, boosting its lifting capacity so it can install the larger foundations and heavier wind turbines needed in the next generation of wind power projects.