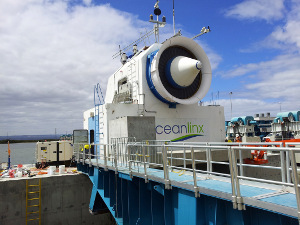 According to the ABR, investors could lose over AUD$80m ($65m) and the firm will lose AUD$10m in public grants and tax breaks.

The move came after Oceanlinx’s plans to install a wave energy generator off Australia’s south coast were nixed when the unit, made of reinforced concrete and weighing around 3000 tonnes, sank during transport. à‚

Oceanlinx had previously installed three prototypes off the New South Wales coast and planned to expand into the US, Mexico, Europe and Asia. In 2010 the firm made the UN’s list of top 10 global clean energy stocks.

A foreign firm is now rumoured to be the preferred bidder for Oceanlinx, but CEO Tibor Vertes has criticized liquidator Deloitte Australia for potentially allowing the technology to leave the country. Vertes plans to sue over what he says is Deloitte’s failure to adequately protect Oceanlinx’s intellectual property. à‚

“It’s money out of the country,” he was quoted as saying.à‚ “It’s finished, it’s over.”

Australia’s wave energy market is seen as one of the main challengers to world market leader the UK, which is currently experiencing a wave of setbacks. Last month British firm Pelamis Wave Power went into administration, while Scotland’s Aquamarine Power announced layoffs of most of its staff. à‚