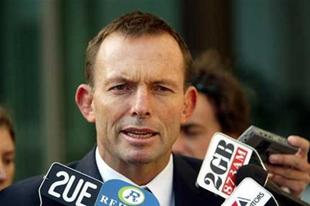 Abbott used a radio interview on Thursday to declare his intention to limit the spread of wind power technology in Australia where possible, adding that the facilities are ‘visually awful’ and causing health problems.

It was a revealing interviewà‚ in which he laid out his personal views on the renewable energy technology and his desire to stop itsà‚ rollout.
The comments have enraged environmentalists and renewable power supporters as numerous reviews by leading medical bodies, including the government’s own National Health and Medical and Research Council, have found no reliable or consistent evidence to support the claim that low frequency sound from wind farms causing health problems.

Firstà‚ the explicit political case for cutting back the target was initialà‚ concern about the scheme’s impact on power prices. When governmentà‚ economic modelling found it would instead ultimately lower prices this line was dropped.

“Now I would frankly have liked to have reduced the number a lot more,” Mr Abbott said, in terms of the industry’s development.

Mr Abbott also strongly hintedà‚ he does not even really want a renewable energy target at all, saying the Howard Government introduced the scheme but on reflection:à‚ “I don’t think we would have gone down this path in this way”.

The PM’s comments are in line with a government that has slashed the budget of the Australian Renewable Energy Agency and strives to close the Clean Energy Finance Corporation.