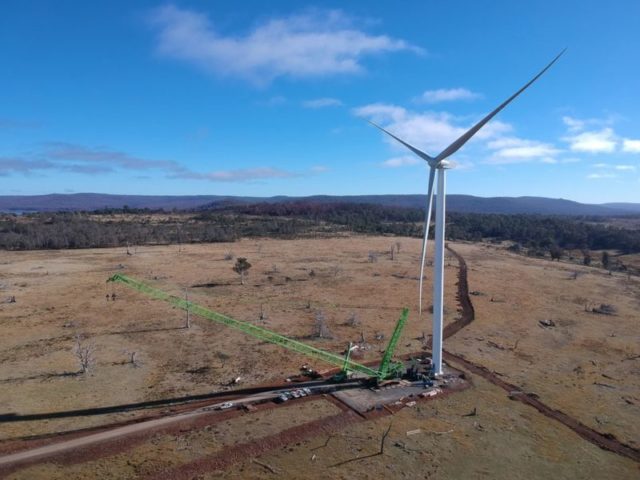 The Clean Energy Regulator of Australia has approved enough capacity to guarantee that the large-scale Renewable Energy Target of 33,000 GWh of additional renewable energy will be met in 2020.

According to the regulator, 6400 MW of large-scale renewable capacity had to be built between 2017 and 2019 in order to generate sufficient electricity to meet the target. On 30 August 2019, this milestone was met ahead of schedule with the approval of four large wind and solar power stations, with a combined capacity of 406 MW.

“This achievement represents the hard work of a growing and dynamic renewables industry,” said Parker.

The approval of the 148.5 MW Cattle Hill Wind Farm, owned by Goldwind and partners, saw the milestone surpassed. The Cattle Hill Wind Farm is built on the hills above Waddamana Power Station, Tasmania’s first hydro scheme that was opened in 1916. The first large power station commissioned in 2017 was Goldwind’s 175 MW White Rock Wind Farm in NSW.

While the capacity target has been achieved, the Large-scale Renewable Energy Target will continue to provide a framework for ongoing renewable energy investment.

“Coincidentally, we are currently tracking another 6410 MW of renewable energy to be built over the coming years. While future investment faces a number of constraints, this is by no means the end of renewable energy investment in Australia, with markets continuing to innovate and adapt to opportunities and challenges,” Parker explained.

The August Large-scale Renewable Energy Target market data is available now on our website. The large-generation certificate market update will be available shortly.