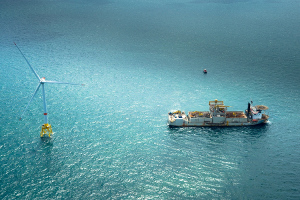 Alstom’s 6 MW offshore wind turbine, the Haliade 150, has produced its first kWh of power, the company has announced.

The turbine is installed 46 km off the Belgian coast at the 165 MW Belwind wind farm.

Tests on the machine (pictured) have helped to optimize installation and commissioning procedures at sea, Alstom said, adding that testing is set to continue in order to confirm the turbine’s in situ behaviour and to fine-tune operation and maintenance procedures.

The Haliade is expected to obtain final certification in the last quarter of this year.

The machine has a 150-metre diameter rotor and 73.5-metre blades. Once fully operational, it is expected to supply power to around 5000 households, yielding 15 per cent more power than existing offshore turbines according to Alstom.

The Haliade will be manufactured in France, at a new generator and nacelle plant located in Saint-Nazaire which is planned to be operational in early 2015. The manufacturing process is expected to generate 1000 direct and 4000 indirect French jobs, Alstom said.

“This project with Belwind asserts our technological leadership and our innovative abilities,” said Alstom Wind Senior Vice-President Yves Rannou. “The installation of our turbine which is robust and efficient thus contributes in boosting the competitiveness of offshore wind energy,” he added.

The Haliade 150 is one of the largest wind turbines in the world, topped only by Samsung’s 7 MW model (which features an 85 metre turbine blade, the world’s longest); Enercon’s 7.5 MW turbine which is designed, unusually for larger-sized turbines, for the onshore market; and the world size winner, Vestas’s 8 MW model.