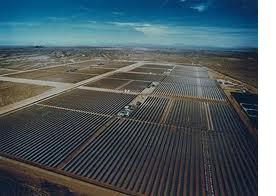 The company behind a $77.7m solar power plant in Rajasthan, India claim that it is the largest single location solar plant across Asia.
The 55 MW project, developed by Welspun Energy, a power subsidiary of Indian conglomerate Welspun Group, was inaugurated by Union Minister for New and Renewable Energy Farooq Abdullah and Rajasthan Chief Minister Ashok Gehlot.

Welspun has developed the solar project under its strategy to establish 1,750MW of renewable energy projects over the next three years with an investment of $2.33bn.

The company’s solar project pipeline includes 550MW solar plants in Karnataka and 100MW capacity in two other regions, for which the company has inked memorandum of agreements.