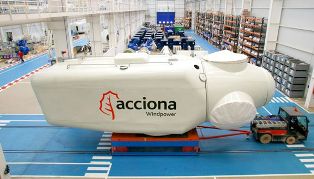 All of the RES wind farms will operate under the UK’s feed-in tariff scheme and the company believes that the deal with Acciona “will bring benefits for small independent developers, landowners and farmers who may have struggled previously to secure turbine technology suitable for smaller scale wind energy projects under the FIT scheme”.

Ian Hunter, RES’ manager for FIT projects, said: “The new understanding between RES and Acciona will help us to deliver both our own and other developers’ FIT wind projects more effectively and brings benefits for all parties involved.  By acting collectively for the stakeholders we represent, RES can secure best price and delivery through economies of scale. In turn, Acciona can produce 1.5 MW turbines to meet a reliable and consistent market demand.”

Hunter added: “Anyone who has investigated the potential to develop smaller scale wind energy projects on their land will know that a major stumbling block can be securing the turbine technology itself.  FIT sites generally comprise only one or two turbines, so turbine manufacturers can be reluctant to give these small sites priority. This can make turbine cost and delivery prohibitive.”

Acciona chief executive José Luis Blanco said the deal with RES “reinforces our presence in the British market, where we have already installed three wind farms and we are actively seeking for opportunities in the FIT market as well as large-scale business”.

RES has developed onshore wind farms in the Europe, the US, South Africa and Australia and offshore projects in the UK, France and Germany.