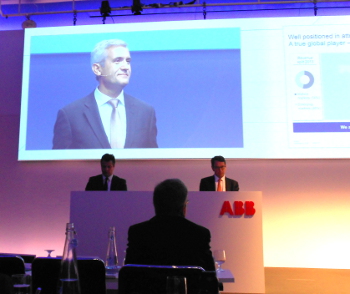 Continuing its efforts to turn its troubled power division around, Swiss engineering group ABB has announced that it is restructuring its business model under new CEO Ulrich Spiesshofer (pictured), who stepped into the role late last year promising a reassessment of the firm’s business processes and management structure.

In a London briefing for journalists this morning, Spiesshofer presented the results of that reassessment. He emphasized that the firm will now withdraw from taking the lead on turnkey renewable energy project development and will instead partner with companies better placed to undertake EPC activities. “We will no longer function in that way,” he said.

“We now understand our risk profile,” he continued. “We’ve ring-fenced what we have in our hands and have allocated the right resources. On solar EPC we will have more than 90 per cent of [legacy] projects completed by the end of this year, and we have stopped taking orders. We are a systems and service provider, not a full EPC anymore.”

On wind projects, Spiesshofer said ABB plans to be a “multi-tier player” providing generators, converters and transformers. The firm will “not build wind turbines but will do everything electrical within a wind turbine: connection, converter stations, cables,” he added. ABB is also stepping away from wind construction and installation, again taking a partnership approach in future.

Referring to lessons learned from the company’s participation in a number of “complex [renewable energy] project situations with operational issues” such as significant delays, Spiesshofer said: “Our competence, capabilities and execution did not match the commercial setup so we got in trouble. We need a different business model.”

Going forward, the firm will “work much more closely with customers on aligning timeframes with different providers to synchronize in a better way,” he added.

Among ABB’s legacy projects is the Dolwin offshore wind grid connection system, which is planned to connect offshore wind farms located in the North Sea’s DolWin1 cluster (the 400 MW Borkum West II wind farm and future nearby wind farms) to Germany’s grid. Spiesshofer said he expects the project to be completed within the next few months.

In his presentation, Spiesshofer noted that several key factors currently contribute to the power division’s low profitability. A backlog of low-margin projects and delays “weigh on profits”, and there is a need to “improve operational and risk management”.

“It’s very important you have confident long-term investors who believe in your company,” he added. “Given the power systems challenges that we had, there were some people questioning.”

However, the firm has a “much better grip on the situation compared to the beginning of this year,” Spieshoffer said. In a speech that followed Spieshoffer’s, CFO Eric Elzvik said he expects the power division to “enter the corridor of transformation” in 2016, but he would not offer specific predictions for 2015. Spieshoffer called 2014 a “trough year” but said he expects to see improvement in 2015.

The firm also announced new long-term targets, with a plan to boost sales by 4 to 7 per cent per year, grow its CAGR by 10 to 15 per cent to 2020 and increase profitability by 11-16 per cent.  According to Reuters, analysts have termed the targets “realistic”.

In good news for these goals, the company also announced today that it has won an $800m order for a subsea HVDC line that will connect the power grid on either side of Scotland’s Moray Firth. Under the scope of the contract with SSE’s Scottish Hydro Electric Transmission plc, ABB is to design, engineer, supply and commission two 320 kV land-based HVDC Light converter stations, one rated at 1200 MW at Blackhillock in Moray and another rated at 800 MW at Spittal in Caithness.

ABB’s scope of supply also includes submarine and underground cables covering a total transmission length of nearly 160 km, the company said. The link is expected to become operational in 2018.

The contract comes on the heels of the firm’s August unveiling of its 525 kV underground and subsea HVDC cable system, which it says will double the power capacity of cable connections from 1 GW to around 2.6 GW, extend the lines’ reach by 500 km with transmission losses of below 5 per cent, and offer a 64 per cent increase over the current highest-voltage lines.

According to sector analysts, the new cable system will figure favourably in ABB’s future bids for offshore wind connection projects.