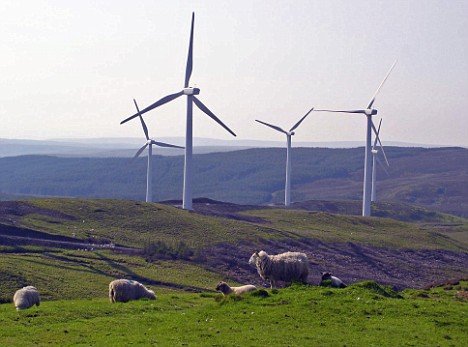 Wind power proved unpopular in the UK this week, with protests over several projects generating debate at the local and parliamentary levels and obstacles arising for other planned projects.

In Northumberland in England, the county council’s planning committee refused construction applications for EnergieKontor UK’s nine-turbine and five-turbine wind projects after public protests over their predicted visual impact. The refusal surprised some commentators as the developer had offered the community a £3.3m ($5.3m) financial package to develop a long-desired rail station and set up a community fund. Nevertheless, local activists went so far as to create a protest website, www.noturbines.com.

Brenda Stanton, chair of a local parish council, was quoted as saying: “I’m delighted by the decision. Tourism is the life-blood of the area so everybody was so afraid whether people would invest any more money. We live in a Conservation Area and we are so close to the Area of Outstanding National Beauty too.”

In Bournemouth on England’s southern coast, a report issued by the local council argued that the proposed 194-turbine Navitus Bay offshore wind farm could have “dire consequences” for the local economy to the tune of £100,000 per year, and could put up to 2000 jobs at risk.  Navitus Bay Development Ltd, a joint venture between EDF Energy and Eneco Wind UK Ltd, called the figures “misleading” and Mike Unsworth, the firm’s project director, was quoted as saying: “The council have based this figure on one statistic from our tourism survey, but it is misleading to view this data in isolation and to then extrapolate in this way. In fact, [wind] turbines have often boosted tourism in a number of locations.”

Meanwhile, global wind developer Wind Prospect has appealed after a council failed to decide on its planning application for construction of the nine-turbine, 20.7 MW Mount Lothian wind farm in Scotland. A spokesman for the firm, a subsidiary of EDF Energy Renewables, said: “The planning committee was expected to consider the application by the end of May, within the 16 week determination period from the date the planning application was submitted. The decision to lodge an appeal was taken as the council did not determine the application within the statutory 16 week period and did not request for that period to be extended.”

And Scotland’s parliament has debated plans for a 24-turbine, 75 MW wind farm near Rannoch Moor, with objections to the project’s predicted visual impact lodged by the Mountaineering Council of Scotland.

A spokesman for developer Talladh-a-Bheithe Wind Farm Limited was quoted as saying that the “carefully balanced project” would minimize views of turbines from key areas. He said: “Our proposals have developed throughout an extensive consultation process in response to community and statutory consultee feedback. Should our proposals be consented, they will make a valuable contribution towards Scottish and UK government energy targets.”

And in Scotland’s East Lothian, a public inquiry has been launched into plans to lay underground cables for Mainstream Renewable Power’s proposed 75-turbine, 450 MW Neart Na Gaoithe offshore wind farm. The scheme is expected to create hundreds of jobs and could power as many as 325,000 homes, but issues around land use rights have proved problematic.

Despite all the negative publicity for UK wind development, this week Vince Cable, the government’s business secretary, said that opposing wind farms because they are ugly is “irrational”. There is no difference between wind turbines and the electricity pylons that already dominate the nation’s skyline, he added.

Cable, a Liberal Democrat, also slammed his party’s governing coalition partners the Conservatives, saying they have an “irrational phobia” of onshore wind farms which is damaging the UK economy. And LibDem energy secretary Ed Davey said this week that “Onshore wind has been growing fast under [the coalition government]. It now generates around 5 per cent of our electricity, and it’s still growing. But the [Conservatives] don’t like this. Day after day they’ve urged me to cap onshore wind. I’ve just said no. Not just because it’s vital for climate change. But also to keep energy bills down, as onshore wind is now the cheapest large scale green energy option.”

Pickles has nixed 10 out of 12 planning permission applications for onshore wind farms in the past year, with four of his decisions going against recommendations by planning inspectors. Commentators say the communities secretary is “killing” the UK’s wind sector.

In response, Department for Communities and Local Government chief planner Steve Quartermain said: “The engagement of the secretary in decisions at appeal amounts to 7 per cent of all decisions on wind farms. I don’t think that’s a disproportionate engagement in the planning system.”