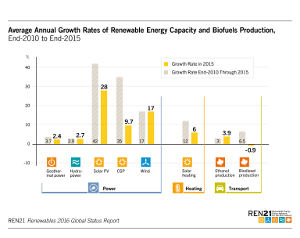 By the end of last year, the report said, there was enough installed renewable power capacity to supply 23.7 per cent of the world’s power needs.

Wind and solar photovoltaics (PV) hit record numbers for the second year in a row, accounting for around 77 per cent of new installations, with hydropower making up most of the rest. Around 63 GW of wind power were added in 2015, as were 50 GW of solar PV and 28 GW of hydropower.

New investment in renewable power and fuels reached $328.9bn, the report found, with an increasing number of bigger private banks offering larger loans and new ways to invest such as green bonds, crowdfunding and yieldcos. In addition, REN21 identified a greater comfort with higher-risk renewable projects on the part of mainstream investors.

And, for the first time, the report said developing countries invested more in renewables than did developed nations, with China accounting for over one-third of the global total and a 58 per cent rise in investment in the MENA region, while European investment fell by 21 per cent.

The factors driving renewables’ rapid growth include the growing cost-competitiveness of renewable technologies, policy initiatives, improved access to financing, energy security and environmental concerns, developing and emerging economies’ growing demand for power, and the need to provide energy access for those without it.

“Electricity from hydro, geothermal and some biomass power sources has been broadly competitive with power from fossil fuels for some time,” the report said, while “in favourable circumstances (i.e., with good resources and a secure regulatory framework), onshore wind and solar PV also are cost-competitive with new fossil capacity”.

REN21 expects to see further cost improvements in renewable power technologies, based on record-low winning bids in 2015 and early 2016 power auctions in many global regions including Latin America, the Middle East-Africa region and India.

Christine Lins, REN21 executive secretary, said: “What is truly remarkable about these results is that they were achieved at a time when fossil fuel prices were at historic lows, and renewables remained at a significant disadvantage in terms of government subsidies.”