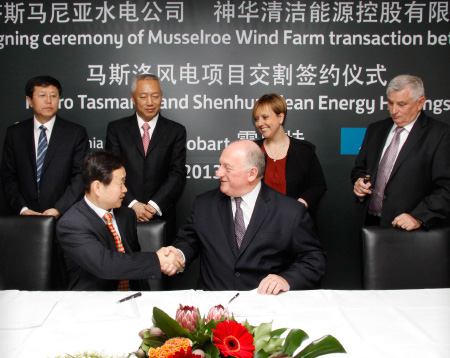 The Musselroe Wind Farm in Tasmania’s north east is now generating enough energy to supply the needs of up to 50 000 homes, as the island’s biggest wind farm was officially opened on Wednesday by Premier Lara Giddings.

The Tasmanian development also means the prevention of 450 000 tons of CO2 being released into the atmosphere each year.

The developer, Hydro Tasmania, first built wind generation on King Island in the late 90s and continued with the construction of two wind farms in north-west Tasmania.

David Crean, Chairman of Hydro Tasmania said the development will complement the company’s hydroelectric activities and also acknowledged the part of the Australian government’s National Renewable Energy Target (RET) in bringing the project to fruition.

“The RET is a key driver for investment in wind farms as well as for the refurbishment and upgrade of our existing hydro plant. Its continuation will support investment and job creation throughout rural and regional Tasmania and Australia, as well as contributing to energy security and greenhouse gas abatement in the Australian energy sector.”

Shenhua’s involvement marks the first investment by a Chinese company in renewable energy generation in Australia.