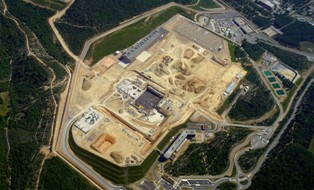 The construction will house a huge doughnut-shaped machine, where scientists hope to tame the fusion reaction that powers the sun as a source of clean energy on Earth.

The FT reports that ITER is behind what is referred to as the world’s biggest energy research project, in a quest to generate power by fusing together the nuclei of hydrogen atoms.

Despite the great expense involved, the potential benefits of fusion power are great – it produces far less radioactive waste than nuclear fission (splitting heavy atoms such as uranium) and its raw materials are almost inexhaustible.

Despite technical, contractual and financial problems that have beset the project since it began in 2010, the organisation expects to begin experiments in 2020, though fusion fuel – the heavy isotopes of hydrogen: deuterium and tritium – will not be fed into the reactor until 2027.

The plan is then to have a superheated “plasma” of reactants, burning at 150m degrees and generating 500 MW of energy – comparable to a medium-sized power station – for several minutes at a time.

The latest design changes – adding more magnetic coils inside the reactor to control the plasma and lining the vessel with metal (tungsten and beryllium) instead of carbon – are intended to smooth the way to its successful production of fusion energy.

For more information – “The most difficult project on earth”