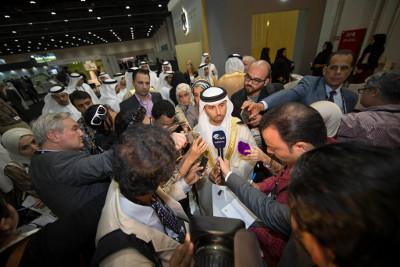 The United Arab Emirates’ energy minister today highlighted his vision for how he plans to alter his nation’s power mix from fossil fuels to “eco-energies”.

Delivering the opening speech at the launch of POWER-GEN Middle East in Abu Dhabi, H.E. Suhail Mohamed Al Mazrouei (pictured, on exhibition floor) said that the UAE could expect a 9 per cent increase in electricity consumption.

He said that this should be done “through using modern technologies” and added: “We need to raise awareness among our sons and daughters and be an example.”

The minister highlighted the effect that the nuclear newbuild plant Barakah would have once complete.

All four units of the plant are currently being built by a consortium led by Korea Electric Power Co (KEPCO) and comprising Samsung, Hyundai, Doosan and Westinghouse, with the first unit expected online in 2017.

The minister said that once complete, the plant would provide 5.4 GW of electricity and make up 25 per cent of the UAE’s energy mix.

He said that Barakah – combined with the growth in the UAE of solar power technologies – would “minimize our use of natural gas”.

However he also stressed that new technologies “cannot rely on subsidies. They do not encourage energy efficiency and sustainability.”

The call for the Middle East to be at the forefront of power innovation was also stressed by Jamila Yousef Matar, director of energy management at the League of Arab States.

She told the audience: “Arab countries need to be active participants in the development of the latest technologies, not just recipients.”