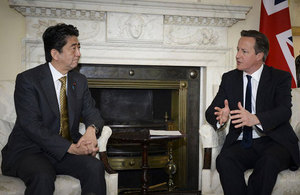 A state visit by the Japanese Prime Minister has prompted a development in the construction of a new nuclear power plant at Sellafield in England.

Toshiba signed an agreement giving it the right to build at the facility, in west Cumbria, during a visit by Shinzo Abe, Japanese prime minister, to London, in an effort to boost trade and investment between the two countries.
The FT reports that the land option agreement for the new nuclear site will involve total payments by Toshiba and its partners to Britain’s Nuclear Decommissioning Authority of over £200m by the time the option is exercised, the energy department said.

The NuGen consortium, a joint venture between Toshiba/Westinghouse and France’s GDF Suez, owns a site near Sellafield in west Cumbria that has been earmarked for three new reactors. They are expected to come on line from 2024 and deliver enough power for up to 6 million homes.