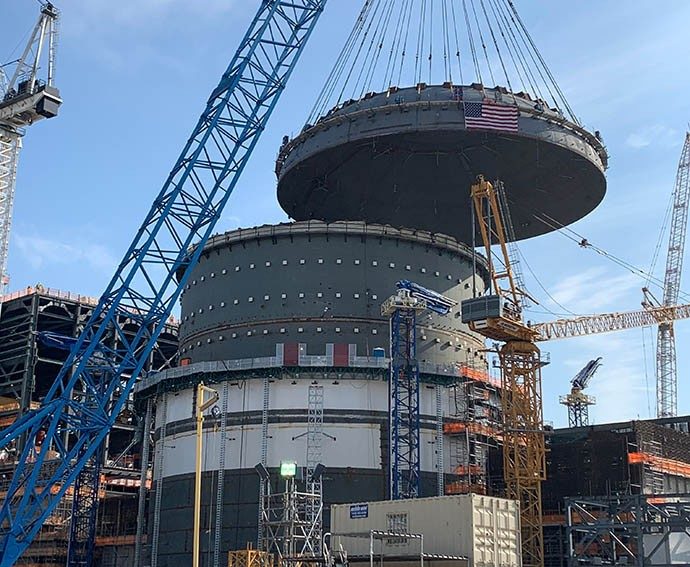 Georgia Power announced that the top heads are now placed on both units 3 and 4 in its major nuclear expansion project.

The final major lifts inside the containment vessels are completed, the utility reported.

Vogtle units 3 and 4 are the first new nuclear power expansions in the U.S. in years. Georgia Power expects to have Unit 3 operational next year and Unit 4 in 2022.

The $25bn project has endured despite numerous setbacks, delays and cost overruns. Bechtel is heading up the engineering, procurement and construction effort.

“Placement of the Unit 4 top head is a culmination of the hard work and dedication of the Vogtle 3 & 4 team as we continue on the path to operation,” said Vogtle 3 & 4 Construction Executive Vice President Glen Chick.

The containment vessel is a high-integrity steel structure that houses critical plant components. The top head is 130 feet in diameter, 37 feet tall, and weighs nearly 1.5 million pounds, more than two fully-loaded jumbo jets. It’s comprised of 58 large plates, welded together, each more than an inch and a half thick.

The milestone comes approximately a year after the Unit 3 containment vessel top was lifted into place. Fuel loading for Unit 3 could happen this November.

Prior to lifting the containment vessel top head, workers successfully completed the placement of the 300-ton polar crane inside the Unit 4 containment vessel. Once the unit is in operation, the polar crane will be used during refueling outages to disassemble the reactor vessel and remove the reactor vessel’s integrated head package, which weighs approximately 475,000 pounds and contains more than three miles of specialty electrical cables.

The crane has been turned over to the project’s Initial Test Program, and the team will run the crane through various tests over the course of the next month to help ensure design requirements have been met and that all crane functions are operational. After testing, the crane will be used to assist in construction activities to place components inside the reactor vessel.

Vogtle 3 & 4 is currently the largest jobs-producing construction project in the state of Georgia, with more than 9,000 workers currently on site, and more than 800 permanent jobs available once the units begin operating.

Significant progress continues to be made at the construction site, with the project now approximately 84 per cent complete, according to Georgia Power.