A new engine series from MAN Diesel & Turbo aims to smash the previous peak performance for its four stroke power plants. Initially focused on remote and island locations without access to gas supplies, the technology offers 50 per cent efficiency and no de-rating even under extreme conditions, writes Alexander James

Efficiency of 50 per cent in simple cycle and no de-rating at altitudes of up to 2500 metres or at temperatures exceeding 50°C – these are the headline figures for the latest stablemate to join MAN Diesel & Turbo’s fleet of four stroke liquid-fuelled engines.

“Why did MAN build a liquid-fuelled engine in the year 2017?” posits Dr Tilman Tütken, vice-president and Head of Region Europe at MAN Diesel & Turbo. “Because the market told us so.”

Highlighting a few key areas of interest for liquid-fuelled engines, he continues: “For many markets and regions currently, there are no gas fuels available, for example remote locations and islands. Target markets that we investigated are in the Pacific, for example, some countries in Africa, Latin America and of course countries in the Middle East. Here in Europe there are the Spanish islands, for example.”

“Key markets are not yet connected to gas networks, they need mid- and small-size power generation capacities,” he concludes.

With the target regions also suggestive of extreme site conditions, for example desert environments, the no de-rating performance was a prerequisite for the design to meet potential customers’ needs. Now, though, MAN also believes the market is increasingly focusing on larger, more flexible reciprocating engine power plants.

Says Tütken: “Seeing a need for more flexibility means not only the fuel, but also in speed for power plants, which nowadays are also tasked with supporting renewables.”

The previous workhorse, the 48/60 range, produced a maximum 21.6 MW. Furthermore, the 48/60 B saw performance fall in extreme temperatures above 35oC.

The 45/60 evidently extends on the performance of its predecessor, but perhaps most significant is the headline efficiency of 50 per cent.

Stefanie Schatz, product manager at MAN Diesel, says: “The main focus of power customers is the unprecedented plant efficiency. There is really a need for a highly efficient engine.

“We have a 3.5 per cent improvement in total efficiency over the 48/60 B. The specific fuel consumption is reduced by up to 7 per cent.”

As Tütken explains: “For long-term investments and baseload or peaking applications we try to combine the efficiency and the flexibility – an increasing requirement for our customers who are concerned not just with the number of kWh sold, but also providing grid services in more and more countries. They also have to provide or pay for grid services, which is also a source of income.”

For the 45/60, suggested applications include baseload, flexible peaking and captive power production.

The new engine is based upon three central modules, essentially the crankcase or base frame unit including the crankshaft; the power unit comprising the piston, cylinder head, liners, variable valves and common rail injection system; and the turbo charger module with both low and high pressure turbos and their associated pipework.

Alexander Koerber, general project manager at MAN Diesel, says: “With three major modules you can combine them to create a whole variety of application variants, without producing every single variant on its own. With this you get lower cost and also easier base fit [to the specific application].”

He adds: “For example, later on, if you change the fuel type from liquid to dual fuel or a gas system, it’s relatively easy to do.”

Launched as a liquid-fuelled engine for both marine and power applications, gas and dual-fuel variants are in the pipeline.

Of the 45/60, which is also designed in both V and in-line or ‘L’ configurations, Tilman says: “An L-configuration for power applications may be considered at a later stage, but current market analysis suggests higher demand will emerge from the large V-engines, which has traditionally been our market.”

Koerber outlines the thinking behind the new power plant: “Starting very easily with the low life-cycle costs with the best efficiency and lowest specific fuel consumption. We have to ensure that we have the highest power density out of one cylinder.”

“This philosophy formed part of the design perspective because the compact design is not only about the power density but also everything which is around the whole engine.”

Indeed, easier installation is also becoming a key design feature in modern power plants. MAN has emphasized this aspect with the 45/60 with more modules integrated onto the base engine and less skid-mounted units.

For example, the coolant filter module and pre-lubrication pumps are integrated into the engine while the double-skinned exhaust includes built in insulation, easing maintenance.

As Koerber says: “A requirement for a reduced number of interfaces came out of intensive talks with our customers to support installation. For example, some components are integrated onto the engine, it’s easier to install those relatively few interfaces to the engine and support system maintenance.”

The design of the 45/60 sees cooling system and other media interfaces located on one side of the engine, while fuel and air feeds are located on the opposite side. As Schatz explains: “Centralized interfaces makes life much easier for our customer and, the most important point here, minimizes erection time.”

Clustering the media interfaces for ease of access moves the installation closer to a ‘plug and play’ approach. Says Schatz: “We save a lot of space, it’s well-structured and it’s also easy for maintenance.”

Saving from both manifolds, risers and reducing the number of separate modules as well as the higher power density saves space in a power plant applications and thus reduces capital costs.

Schatz observes: “The size of the power cell itself is nearly the same [as the 48/60] but due to the high power density of this engine there is a lot more engine in the power house.” She adds: “We have high performance with low emissions, and this is just inside the engine.”

Referring to emissions performance, Schatz says: “We’ve reduced the emissions from the engine. Compared with the MAN 48/60 TS, nitrogen oxide by -5 per cent which means we need 5 per cent less urea for emissions treatment, sulphur dioxide is down by 7 per cent. As a rough number this is about 1300 tonnes per year less. Last but not least, carbon dioxide also down by 7 per cent.”

Back pressures of up to 50 millibar can be accommodated without any penalty on fuel consumption, says Koerber.

A solution with integrated selective catalytic reduction (SCR) is also under preparation and will reduce NOx emissions further, by up to 80 per cent. In addition, there a continuous emission monitoring system to validate the engine’s performance.

Schatz adds: “We are also reducing the vibration and also the noise because those noise is also a problem so we are providing silencers for this application.”

Although the 45/60 was designed from scratch and marks a significant improvement on the performance of the earlier 48/60 design, that two units do share some characteristics. For example, the common rail injection system has been a regular feature on MAN four stroke engines for more than a decade.

As Koerber explains: “We pretty much used the existing system and just adapted it to, for example, the higher engine speeds.”

With the two-stage turbo-charging, the common rail is pressurized to some 1600 psi and a large part of the impressive performance of the 45/60 is down to its sophisticated air management system that allows rapid changes in load, for example.

The two-stage turbo charging system uses low and high pressure turbos, each with its own intercooler, which allows much higher compression ratios than single stage turbos.

An electronic combustion control process supports fuel injection, variable valve timing, turbo chargers and a host of other parameters to optimise the performance depending on the load and ambient conditions. This version of the control system is also based on a more distributed architecture rather than a single big module. “You have a compact design and you have a single access point for all data,” notes Koerber.

In a statement Dr Gunnar Stiesch, head of engineering engines at MAN Diesel & Turbo, noted: “The company’s latest generation digital Safety and Control System, SaCoS 5000 … offers unprecedented data availability and optimized alarm visualization and diagnosis. The MAN 45/60 is not only online-ready, but also equipped for the digital future of power generation.”

MAN also places much emphasis on its position as a manufacturer of both engines and turbo charging systems in facilitating the integration between the units and that factor heavily in reaching such high performance. As Koerber says: “The connection between the engine and turbo charger is the key factor to reach the highest efficiency.”

“We are the only company in the market that develops both engine and turbochargers. This unique, in-house competence allows us to truly tailor-design this engine for optimized two-stage turbocharging and to unleash its full potential. Operators thus profit from maximized peak pressure and optimal utilization of the Miller Cycle,” states Stiesch, referring to a method of valve timing that can boost the performance of large bore four stroke turbo-charged engines.

With the V configuration units ranging 12 to 20 cylinders and between 15 MW and 26 MW of output initial deliveries are expected to begin in early 2019 with serial production anticipated to commence the following year.

Alexander James is a freelance journalist specializing in the energy sector 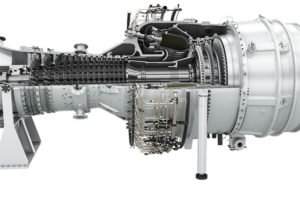