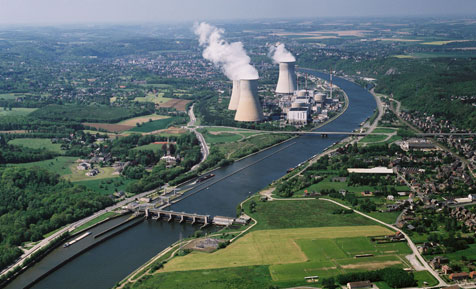 A study performed by PwC Enterprise Advisory (PwC) and published by the Belgian Nuclear Forum (BNF) has recommended a mix of renewables and nuclear power as the optimal way Belgium can achieve stable energy prices, guarantee its security of electric supply and meet climate objectives.

Nuclear Engineering International reports that of three scenarios produced by the advisory this mix represents the only strategy that allows for a maximum reduction of CO2 emissions by 2050 is one where renewables growth is complemented by Belgium’s existing 6 GW of nuclear capacity.
The advice is contrary to the Belgian government’s actual plans for its energy mix, as it plans to phase out nuclear power entirely within a decade.

In the absence of nuclear and in order to satisfy stability of the power supply Belgium will have to either start importing energy or invest in “expensive” thermal power stations, the study notes.

PwC concludes its study by suggesting that a mix of renewable and nuclear energy sources “seems to be the most appropriate” way to meet domestic demand.

Belgium has seven reactor units in commercial operation, four at Doel NPP and three at Tihange NPP, which together, generate about 46 per cent of the total electricity. In December 2011, the previous government confirmed that it would close all Belgium’s commercial reactors in line with a phase-out law of 2003. Doel 3 and Tihange-2 are both scheduled to close at the end of their 40-year lives in 2022 and 2023, while Doel-4, Tihange-1 and -3 are closing in 2025. The government has extended the operation of Doel-1 and Doel-2 from 2015 to 2025.