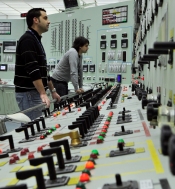 The plant is one of eight nuclear reactors in Spain and is 42 years old – the second oldest in the country. It was closed under an order issued by the Industry and Energy Ministry but its operator Nuclenor – owned by Iberdrola and Endsea – said the closure was “solely due to economic reasons” and not for technical or safety concerns.

Spain’s Deputy Prime Minister Soraya Saenz Santamaria (pictured) said Nuclenor has asked for the plant’s operating license not to be renewed but she added that the government has not ruled out reactivating the plant at a later date.

The closure ends a prolonged period of uncertainty over the future of the plant. Its licence renewal first came up for review in 2009 and the Nuclear Safety Council recommended a 10-year extension be granted.

However the then Socialist government granted only a four-year licence extension to this year. In January 2012 a new conservative government removed the 2013 operational limit with a view to allowing the plant to run until 2019, subject to Nuclenor renewing the licence.

But Nuclenor delayed that application until it had details of new government rules and taxes, since it said it would have to spend €480m on the plant to give it a 2019 shelf life.