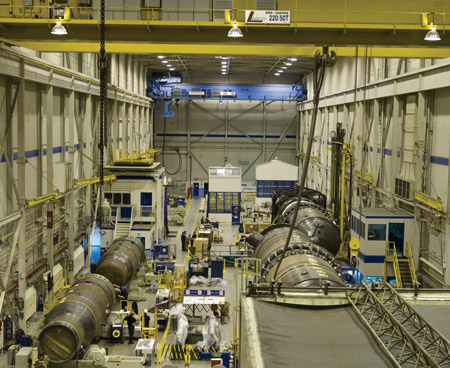 There are sound economic and technical reasons for Europe to diversify nuclear generation by building a large number of small modular reactors instead of building a small number of large nuclear power plants, argues Dr Colin Elcoate

Nuclear-powered electricity generation should be a key component of every country’s energy portfolio.

It offers secure electricity supply with low carbon emissions, free of reliance on fossil fuel imports with their volatile pricing and threat of politically related supply issues, and is available when the sun and wind are not co-operating,

However, the initial investment in new, large-scale nuclear power stations could be a barrier to further development of the industry in Europe.

France, with its large nuclear capacity, has the lowest emissions from power generation of any European country. In addition, with declining fossil fuel production and reserves in Europe, the continent is increasingly dependent on imported coal and gas and so subject to volatile market prices and the ever-present threat of politically motivated disruption of supply by producers or even countries hosting pipelines.

There are, of course, good ecological arguments for renewable sources, but despite significant advances most renewable capacity is still weather-dependent, and so while a valuable contributor when conditions are favourable, there will be a need for backup generation capacity for baseload if the lights are not to go out under unfavourable weather conditions for some years to come.

In theory, at least, the ongoing cost of nuclear-powered electricity should be lower than fossil fuel alternatives, a further advantage – but, despite these good arguments, there is very little current or planned investment in nuclear power plants in Europe.

The real road block is investment. Nuclear power plants are very expensive to build. Per MW of generating capacity, the initial investment is around twice as much as coal and five times as much as gas.

This means that private industry is unlikely to make new investments in nuclear power generation unaided or without significant price guarantees. The arguments for developing nuclear power are primarily security of supply without the emissions of fossil fuels, and this requires political will.

The problems of securing and maintaining investment have been ably demonstrated recently by the last-minute financing difficulties for the Hinkley Point C plant in the UK.

Given this scenario, even the huge commitments of supply chain companies such as SPX, which has developed a Turbine Water Lubricated backup cooling water pump that provides assured operation in complete blackout conditions even when submerged, are unlikely to assure the long-term future of the industry on their own.

Private capital is even more unlikely to make the required investments in research and manufacturing technology to build future stations more economically without an assured market.

Granted, nuclear power is a highly complex industry, but so is modern aviation and here economies of scale and competition have operated to create a huge global industry that mass-produces highly sophisticated aircraft at reasonable costs and with an impressive safety record.

Within the nuclear industry there is one parallel: the fuel supply chain. Because there is an assured demand, the supply chain has evolved and improved, suppliers have invested, competition is working to drive costs down and everyone benefits.

Regrettably, this does not apply to building new nuclear power plants. Europe in the 21st century will not see a repeat of the political will such as the post-war decision by France to build 58 pressurized water reactors (PWRs), which created a strong supply chain in France and elsewhere. More recently, Asia – and, in particular, China – has demonstrated similar political will, and it could be argued that the European supply chain exists today mainly thanks to China. However, with the emergence of an indigenous nuclear industry in Asia, that market is no longer so attractive to European suppliers and will certainly not maintain the industry and the critical supply chain in Europe for the next decades.

Nothing less than an assured market of at least 100 units in the foreseeable future will sustain the investment, permit the industrialization of manufacture and increase competition to create an efficient modern industry – and Small Modular Reactors (SMRs) look set to be that market.

The concept common to all is the industrialization of manufacture. These SMR units will be built in factories and transported to sites with short lead times, a huge contrast with the 10-20 year cycles of design and construction of classic nuclear power plants.

Industrialized construction in volume in factories will lead to technology improvements, and the need for parts in greater quantities will attract investment and drive down unit costs throughout the supply chain. New players will enter the market with all the advantages of increased competition. These factors together will continue to drive down costs in a virtuous circle that will make the technology viable in an ever-wider range of applications. Industrializing manufacture of nuclear plant will also lead to increased safety as operating experience, track record, etc are systematically fed back into the manufacturing processes – as has been seen, for example, in the aircraft industry.

Applications currently envisaged for SMR-powered electricity generation include power for remote regions lacking electricity grid infrastructure, power for smaller islands, mobile applications and replacement of aging and polluting fossil fuel plants. In addition, SMRs will find many non-electric energy supply applications in industry and transport – we should not forget that the earliest users of small scale nuclear power were the world’s navies, where the typically 50 MW reactors have a solid track record.

In generation applications, two SMRs on a single site could serve a population of two million people. At coastal sites with unlimited cooling water, these could be expanded over time by the addition of further units to create an equivalent to the 2.5 GW or 3 GW capacity of current large-scale power stations.

Elsewhere, the smaller capacity and proportionally reduced cooling water requirements would permit such SMR-based power plants to be located at inland sites with benefits for distribution of power and reduced dependence on individual stations. Similarly, SMRs would put the benefits of clean nuclear power within the reach of isolated locations in, for example, developing countries and smaller islands.

In Europe, DCNS in France is developing FlexBlue, a PWR-based SMR with an output capacity of 160 MW, designed to be installed on the seabed under 60 to 100 metres of water. It would be located several km offshore from a centre of power demand such as a city, industrial base or remote community which it would serve via underwater cables.

Similar in concept to the submarines that DCNS has been making for the French navy for 40 years, Flexblue is a cylindrical unit 140 metres in length and 14 metres in diameter housing the reactor, steam generators, turbines, the electrical generator and an on-board control room giving operators local control over critical operations such as startup and maintenance. However, Flexblue is designed normally to be remotely operated from an onshore control room. Flexblue will be fully built in a factory or shipyard and then transported to site on a purpose-designed ship.

A key advantage of the concept is that immersion in 100 metres of water guarantees an infinite heat sink as well as protection against most external hazards. With neutral buoyancy, FlexBlue is effectively decoupled from the seabed, giving a high degree of protection even from earthquakes. DCNS anticipates a market for 200 units over 20 years, offering the economies of scale and benefits of industrialized volume manufacture discussed above.

Elsewhere in Europe, headline activities include participation by the Politecnico di Milano in the research and development of the International Reactor Innovative and Secure (IRIS) consortium, another PWR design, of 335 MW electrical capacity.

Of course, underlying these European headline activities, many suppliers to the nuclear industry, including SPX Nuclear, are supporting both the European initiatives and those in other parts of the world.

One of the most important safety functions on a nuclear power plant is the continued operation of cooling systems to maintain core cooling and ultimately reduce the risk of core damage and potential fuel melt.

At Fukushima, the reactor emergency cooling systems operated from backup generators which failed when submerged after the tsunami hit.

Without electrical power, cooling was lost and the reactors overheated with all too well-known results. Safety of nuclear plants is evolving continuously. The new SMR designs include both innovative safety technology and passive safety systems that do not require operator intervention giving the plant resilience to a station blackout (SBO) for prolonged periods. An example is the ClydeUnion Pumps (CUP) Turbine Water Lubricated (TWL) pump from SPX, designed and tested to provide emergency core cooling and post-accident containment heat removal. Completely self-governing, it requires no cooling water, lubrication oil systems or electrical supply to function.

There are clear advantages, both economic and technological, to the new generation of SMRs currently under development. However, for the economies of scale and other benefits of industrialized manufacture to be realized, the first units will have to prove the concept.

Reliability, safety and operating economics will need to be demonstrated before these designs can be commercialized. In short, electricity suppliers, with some form of government incentive, will need to invest on a huge scale to build and operate the first SMR power plants to create the confidence required for the supply chain to also invest in large-scale production.

So these first of a kind installations will not initially benefit from the economies of scale envisaged in the long term, and will almost certainly require public funding to get the concept off the ground in order for a zero-emissions energy future to be a reality.