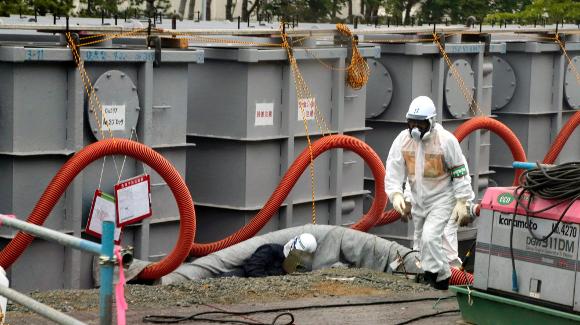 For a second time in two months highly radioactive water has leaked from storage tanks surrounding the Fukushima nuclear power plant in Japan, which was heavily damaged by an earthquake and tsunami in March 2011.

Tokyo Electric Power (Tepco) confirmed on Thursday the highly radioactive water, which includes up to 580,000 becquerels per litre, had leaked at the Fukushima number one plant from a different storage tank to the one where a leak was found in August.

Some 430 litres of the toxic water had leaked from one of 450-ton tanks owing to the heavy rainfall brought by recent typhoons, a Tepco official said.

“Contaminated water may well have flowed into the sea,” the official said.

The flow was halted after a tonne of contaminated water was transferred from the leaking tank to a new storage container, Jiji news agency reported.

The company poured thousands of tonnes of water onto runaway reactors to keep them cool, and continues to douse them. Thousands of tonnes of radioactive water are being stored in temporary tanks at Fukushima, and the new leak was found at a section where five 450-ton tanks are placed on a slightly slanted ground, the official said.

In August, some 300 tonnes of toxic water was discovered to have leaked from a separate tank, with part of it believed to have flowed into the Pacific Ocean.