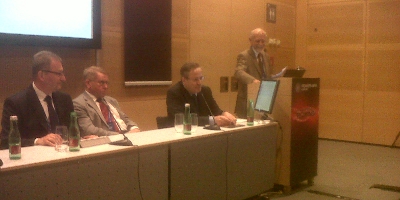 An insight into the state of the nuclear power generation industries in Russia, Slovakia and Switzerland was provided at the POWER-GEN 2013 event in Vienna on Wednesday.

Professor Jukka Laaksonen, Vice President of Rusatom Overseas told the audience at the Country and Project Status presentation that Russia’s Generation III nuclear power plants began construction in Autumn of last year, the first of which is expected to be operational in 2016.
The VVER model AE6 2006 type nuclear reactor is currently subject to the Russian nuclear safety authority’s evaluations and the new model will be informed by the results of comments to be provided by Rosengoatom and Rostechnadzor.

Amongst the design safety adaptations inherent in the AE6 2006 were a passive system for decay heat removal from the reactor via steam generators.

Professor Laaksonen said, “When it came to safety enhancement, the key word is diversity, with both active and passive safety systems working side-by-side.”

There are currently six new model nuclear power plants under construction in Russia, four of which began in 2008 and two in 2011.

“All new nuclear power plants under construction take into account the main safety issues that arose from Fukushima, including cooling of core without electrical power and the protection of the reactor containment integrity after potential core meltdowns.”

Meanwhile in Slovakia two nuclear power plants are being upgraded, at Bohunice and Mohovice, under the management of Enel-owned Slovenske Elektrarne.

At Bohunice seismic reinforcement, fire and mechanical improvements have been carried over the last decade and following Fukishima there has been additional testing involving the mitigation of severe accidents. Other improvements have seen the integration of external coolability of reactors, controlled depressurisation of reactors, containment of hydrogen management and the inclusion of an alternative electrical power system.

The &#8364;3bn Mohavice 3 and 4 reactors currently has 150 contractors, 800 Enel experts and a peak time work force of 3,500. The plant’s procurement process began in 2007 and is expected to be operational in 2015 and is being constructed to match the most up-to-date modernisation techniques.

As a result of the investment being made, Slovakia expects to see its nuclear capacity increased from 1950 MW to 2890 MW and a significant volume of its power available for export to neighbouring countries.

Engineering Manager Vladivoj Reznik admitted that the projects in the country have had difficulties to overcome due mainly to the loss of sector expertise, as Slovakia’s nuclear sector had been dormant for many years, before reinvigoration.

“Problems associated with what is a complex industry included design and material documentation and the complexity associated with managing 150 suppliers and over 1,000 agreements. Some companies also went bankrupt during operation and we had to source new contractors and satisfy minority shareholders on aspects of budget for construction.”

Leon Charlier of ABB provided valuable insight into the ongoing retrofit project being carried out at Leibstadt nuclear power plant in Switzerland.

Mr Charlier said that the Instrumentation and control systems (I&C) Project had already helped to improve the capacity of the plant to 1270 MW due to low pressure turbine, station transformer and generator retrofits.

“This work is now ongoing with replacement of the steam turbine condenser and reactor recirculation pumps scheduled for 2015. Our overall target is to ensure a reliable operation by 2045.”

Amongst the upgrades taking place are a change of technology from relays and wired logic to DCS (IT controller), the harmonisation of information and automation systems integrated into one single platform and transition to screen and mouse instead of push button technology.