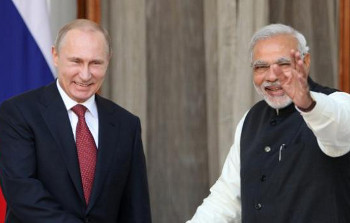 Russia and India have agreed to jointly build at least 10 new Indian nuclear reactors by 2035.

“We have outlined an ambitious vision for nuclear energy of at least 10 more reactors,” Modi said.

According to Russian state-owned nuclear firm Rosatom, two of these reactors are expected to be completed by 2016. The reactors are part of a $5.5bn project begun in April to add two additional units to the 2 GW Kudankulam nuclear power plant in Tamil Nadu state.

The plant’s first unit came online this week after an 80-day shutdown due to a turbine malfunction. Originally scheduled for commissioning in 2007, the project has been riddled with delays and cost overruns. Unit one was grid-connected in October 2013, while unit two is at the commissioning stage according to operator Nuclear Power Corporation of India Ltd (NPCIL). à‚

Under this week’s agreement, both countries aim to “minimize the total cost and time of construction of nuclear power plants”.