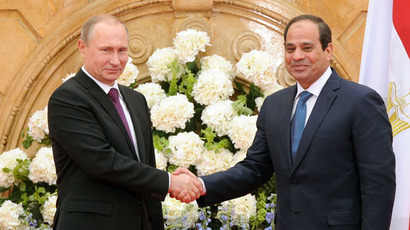 The announcement was made following a meeting of the two leaders on Tuesday in Cairo.
Putin confirmed that Russia would contribute to the construction of what would be Egypt’s first nuclear power plant, as well as the training of staff and scientific research.

“If final decisions are made, it will mean not just building a nuclear power plant, it means the creation of the entire new atomic industry in Egypt,” Putin said.

The plant would be built at the existing nuclear site in Dabaa, on the Mediterranean coast west of the port city of Alexandria, where a research reactor has stood for years.

Boosting electricity generation has been a priority for Egypt, where shortages lead to frequent blackouts in cities, especially in the summer, which have stoked popular anger.

Sergei Kiriyenko, the head of Russia’s Rosatom state-controlled nuclear corporation, said a power plant with four reactors would be built, producing 1200 MW each.