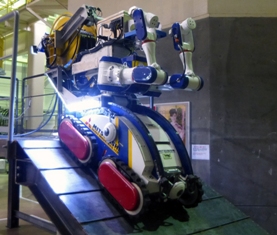 A robot designed to perform maintenance and repair tasks at disaster or accident-hit power stations is being used at the Fukushima Daiichi nuclear plant in Japan.

The robot is called the MEISTeR (Maintenance Equipment Integrated System of Telecontrol Robot) and has been developed by Mitsubishi Heavy Industries.

The MEISTeR has being carrying out demonstration testing at the plant, which was crippled by an earthquake and tsunami in March 2011, and MHI says these trials have proved so successful that the robot is to be deployed to carry out decontamination and sampling tasks.

The MEISTeR is an enhanced version of a disaster response robot initially developed by MHI after an accident at the nuclear fuel processing facility in Tokai-mura, Ibaraki Prefecture, in 1999.

The improvements to the robot were developed with the intention to deploy it at Fukushima Daiichi and were implemented in co-operation with the plant’s owner Tokyo Electric Power Company (TEPCO) and the International Research Institute for Nuclear Decommissioning.

MHI said that the robot was “significantly improved in terms of radioactive resistance and remote control capability, making it adaptable to performing a variety of tasks in highly radioactive locations”.

The company added until now, most disaster response robots have primarily performed inspection, maintenance and similar tasks relying on cameras.

However, the MEISTeR can switch between tasks by changing the tools attached to its arms. In addition to inspection and maintenance, the MEISTeR can perform decontamination work, concrete core sampling, and the cutting of obstacles blocking pathways.