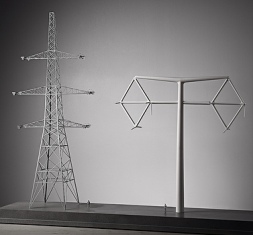 An innovative new electricity pylon could be used for the first time at the site of Hinkley Point C new nuclear power station in the UK.

The T-pylon (pictured) is the brainchild of Danish engineering firm Bystrup and in 2011 won an international design competition run by the Royal Institute of British Architects to find a new-look pylon for the 21st century.

It could make its operational debut as part of the Hinkley Point C Connection, which will run between Bridgwater and Avonmouth in England and will carry electricity for the southwest of the country.

The connection – which is to be built by British transmission operator National Grid – will include Hinkley Point C power station, which EDF wants to build next door to existing Hinkley reactors.

Communities living in the area feared that the new 400,000 volt pylons needed to carry the connection’s wires would be much higher than those on the existing 132,000 volt line currently running along the route.

However, at 36 metres high, the T-pylon is nearly one third shorter than the traditional 400,000 volt lattice design and engineers from National Grid are now working with landscape experts to identify sections along the connection’s route where the new pylon would have the most benefit.

It will then be included in the next round of public consultations on the connection in September.

Peter Bryant, National Grid’s project manager, said:“The steel lattice pylon has served us well and will continue to be used where appropriate but in September we’re looking forward to hearing people’s views on the T-pylon and where along the route it would be the best choice.”

He said the T-pylon was “a graceful, refined structure fit for the needs of our low carbon, 21st century” and would give communities “a radical departure from the traditional lattice”.