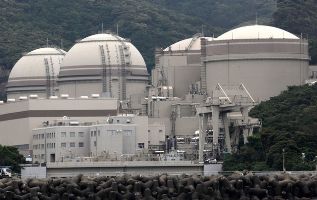 Japan’s only operating nuclear reactor has been shutdown for maintenance, prompting concerns about the reliability of power supplies over the approaching winter period.

In a statement, Kansai Electric Power Company confirmed that it had halted the Number 4 reactor at its Ohi plant yesterday, leaving the country nuclear free for the first time since July 2012.

The Ohi reactors (pictured) were the only ones to restart after the March 2011 Fukushima disaster.

Prior to the Fukushima accident, Japan generated 30 per cent of its electricity from nuclear; now all 50 of its reactors lie idle.

The reactors will have to pass new safety standards before being restarted.

Makoto Yagi, chairman of the Federation of Electric Power Companies of Japan, warns that Japan may not have enough capacity in winter without nuclear power.

The shutdown is expected to leave utilities with little choice but to increase the use of expensive fuel oil to ensure electricity supply.

The reactors at Ohi were restarted in July last year after closing in March 2012. Under Japanese regulations, reactors have to undergo maintenance at least once every 13 months.