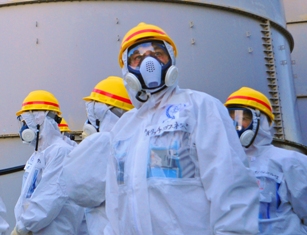 Ceremonies have been held in Japan today to mark the third anniversary of the earthquake and tsunami which triggered the Fukushima nuclear disaster.

A minute’s silence was held at 2.46pm, the time when three years ago the  9.0-magnitude earthquake – the strongest in Japan’s history – struck the country’s east coast.

In the day’s leading up to taday’s anniversary, thousands of people took to the streets of Tokyo to protest about Japan’s use of nuclear power and Prime Minister Shinzo Abe’s plans to restart some of the nation’s idle reactors.

In PEi’s January edition we asked leading power players if the nuclear industry had emerged from the cloud of Fukushima.

Brian Cowell, director of nuclear operations at EDF Energy, said the earthquake and tsunami “will have a lasting influence” on the nuclear sector but added that “the industry has responded professionally to the events in Japan”.

“We are an industry that encourages sharing of the lessons from any event however large or small so that we can learn and respond appropriately. As an industry we have individual and collective responsibility to ensure we deliver the benefits of nuclear technology safely, while maintaining public trust and confidence by being open and transparent.”

Patrick Fragman, senior vice-president of nuclear business at Alstom, said Fukushima “has had a considerable effect on the development of nuclear energy” and added that “it is likely that its effects will be felt for years to come”.

Tarik Choho, chief commercial executive officer at AREVA, said “there is no doubt that the impact of Fukushima has been significant, and there are still some challenges that lie ahead for the industry”.

However, he added that “there is no question that the nuclear energy perspectives remain solid”.

As in many other aspects of the global economy, the biggest growth will be driven by Asia, where half of the new constructions are expected to be built.”

And he said that “this growth will continue, because, with or without Fukushima, our world faces the same challenges – if development remains at the current pace, by 2050 our planet will need twice as much energy as today.

“To meet this demand, any new sources must deal with increasingly complex expectations: competitiveness, job creation, climate change, control of energy consumption and security of supply. Nuclear meets all these criteria.”

In the US today, Nuclear Regulatory Commission Chairman Allison Macfarlane said the agency and the nuclear industry had made “substantial progress in work to enhance the safety of US nuclear plants by applying the lessons from the tragic Fukushima reactor accident”.

“When it comes to post-Fukushima actions, the NRC and industry can both be proud of the hard work we’ve done to date, to learn from this tragedy and take strategic actions to enhance safety.”

She added that “there are some who may feel we’ve done too much, and some who’d argue we haven’t done enough”.

“But, as the most safety-significant changes draw nearer to completion, we’re confident that the requirements we’ve imposed, and the actions industry has taken, supplement an already rigorous oversight programme.”