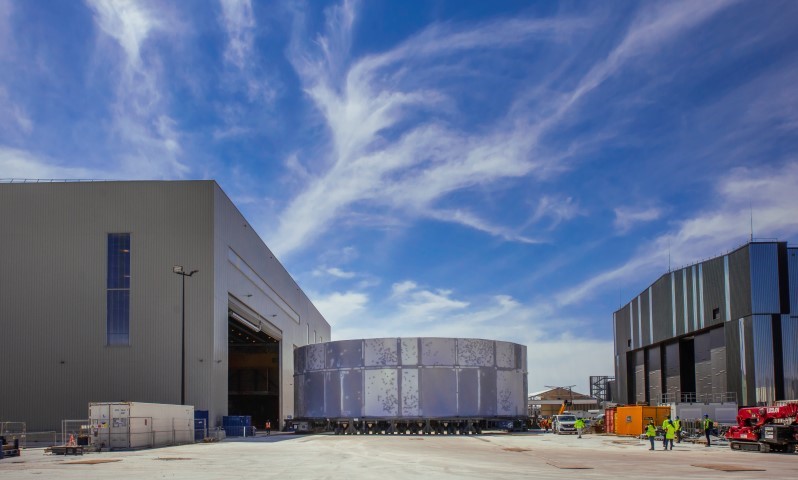 In addition to the already-completed ‘Lower Cylinder’, the new components, ‘Base Section’ and ‘Upper Cylinder’, are central to the construction of the cryostat ” the largest stainless steel, high-vacuum chamber ever built ” which will form the exterior of the fusion reactor. When fully assembled, the cryostat will be 30 m tall with a volume of 16,000 mà‚³.

“We received the ITER order for the assembly of the cryostat in 2015 and are very proud – with the ‘Base Section’ weighing 1,350 tonnes ” that we have been able to successfully assemble the heaviest single component of the entire project,” said Norbert Anger, Site Manager of MAN Energy Solutions in Deggendorf, where the ITER project is mainly managed within the company.

“For the installation, our employees used specially developed welding processes on-site, which once again showcased our know-how in the complex processing of stainless steel,” concludes Anger.

With the ‘Base Section’ and ‘Upper Cylinder’ completed, the construction of the fourth and final component of the cryostat ” the so-called ‘Top Lid'” can now begin with MAN Energy Solutions once again responsible for assembly and welding work. Assembly of the four individual sections is scheduled for late-summer 2020.

A total of 35 nations are working on the ITER project to build the world’s largest tokamak: a fusion reactor operating on the principle of magnetic confinement.

The facility is intended to demonstrate that nuclear fusion can be a realistic and CO2-free energy source of the future.

The heart of the tokamak (acronym of the Russian translation: “Ring chamber with magnetic coils”) is a vacuum vessel in which the atomic nuclei of hydrogen isotopes ” deuterium and tritium ” fuse into helium. The enormous heat generated by this process will be used to generate energy and mimics the principle by which the sun and other stars function.

The cryostat forms the envelope of the ITER machine and provides the ultracold, vacuous environment necessary for the superconducting coils and vacuum vessel to work. In total, the cryostat consists of 54 individual elements produced by Indian company, Larsen & Toubro, and are assembled on the construction site by MAN Energy Solutions.

“It is a special honour for us to be involved in the most ambitious energy project in the world. We are helping to bring the source of solar enery to earth and thus generate CO2-free energy in huge quantities. This project unites the world community and has the potential to revolutionize energy production,” added Anger.

Construction work on the site of the ITER project began in 2012 and according to current plans, the fusion reactor will generate the first plasma in 2025, with the full experiment scheduled to begin in 2035.