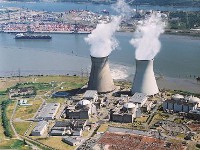 Protesters from Belgium, The Netherlands and Germany formed a 90 km-long human chain across the three countries’ border triangle on Sunday to demand the shutdown of two Belgian nuclear reactors.

Belgium’s nuclear regulator cleared both reactors to restart in 2015 after shutdowns the previous year when manufacturing defects were found in their pressure vessels.

However, earlier this month new microfractures were discovered at Tihange 2 when experts using ultrasonic technology found the latest cracks on the high pressure boiler.

Belgian interior minister Jan Gambon said the security of the plant was not threatened and that it would not be shut down.

Doel 3 was also found to have microfractures in late 2016.

Each reactor generates around 15 per cent of Belgium’s power and in 2015 operator Engie-Electrabel extended their operational lifespans by ten years, to 2025.

Nuclear contributes about 55 per cent of Belgium’s total power supply.