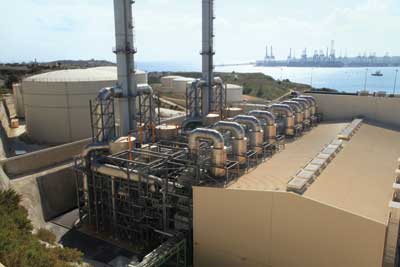 French company Areva has signed a pact with Hungarian engineering firm Evopro to collaborate on nuclear and renewable energy technologies.

Budapest-based Evopro specializes in industrial automation systems and it signed a memorandum of understanding with Areva at the Hungarian Foreign Affairs and Trade Ministry in the presence of Deputy Minister Dr László Szabó.

The agreement will cover both nuclear new builds and existing plants, with the first area of collaboration to be the supply of instrumentation and control systems to Hungary’s current and future nuclear reactors.

Frank Apel, Areva’s senior vice-president of sales in Western & Northern Europe, said: “This agreement strengthens our relationship with the Hungarian nuclear industry and supports our localization initiative for new builds and modernization projects.

“With the combination of technical expertise and project management, Areva and Evopro are well-positioned to support the Hungarian nuclear industry in years to come.”

Dr Szabó said the agreement “is another excellent example of the international recognition of Hungarian engineering expertise. It also contributes to the Hungarian government’s foreign economic policy goals, which aim at strengthening the domestic small and medium enterprises and facilitating the export of services, technologies and know-how.”

Areva’s relationship with the Hungarian nuclear industry dates back 15 years to the installation of the instrumentation and control system at the Paks nuclear power plant.

The 140 MW Delimara power station was commissioned in 2012 and currently operates on eight Wärtsilä 46 heavy fuel oil engines. Four of these engines will be converted into Wärtsilä 50SG engines and four into Wärtsilä 50DF engines.

The work will begin in January 2016 and is expected to be completed later that year in October.

Tan Qing, project manager for SEP Malta, said “the project in Malta is Shanghai Electric Power’s first step in Europe” and added that “we are very happy to be working with Wärtsilä on this conversion project”.

Niclas Nyström of Wärtsilä said the conversion will “not only boost the power plant’s output and enable more cost-efficient operation, but it will also benefit the environment through lowered emissions”.

A new power plant has been commissioned in Mozambique by Aggreko and state power utility Electricidade de Moçambique (EDM).

The diesel plant in the port city of Nacala comprises 22 diesel generator sets and has a maximum output of 18 MW.

Power demands across Mozambique are rapidly increasing as the country’s annual GDP grows by more than 7 per cent and its industrial sector rapidly expands.

However, electricity supplies in northern Mozambique have been strained due to recent seasonal flooding that has caused disruption to networks in several provinces.

EDM executive board member Carlos Yum said: “Nacala is experiencing rapidly growing commercial and industrial activity based around its role as a logistics hub of northern Mozambique. By adding additional generation capacity close to areas of high energy demand, EDM is addressing increased power requirements with fast-track power provision until longer-term sustainable solutions can be deployed.”

Aggreko has around 2 GW installed across 30 African countries. It already supplies power to several remote mining operations as well as the 232 MW cross-border plant at Ressano Garcia.

Clyde Bergemann Power Group Europe (CBPG) has won a $10m deal to design, supply and commission SO2 and dust reduction systems for a cogeneration plant in Bedzin, Poland.

CBPG was awarded the contract by SBB Energy, a Polish engineering company and the EPC contractor providing the full package of emissions controls for the plant.

The plant’s operator, Elektrociepłownia Bedzin, is carrying out the work to meet new emission limit values that are part of the European Industrial Emissions Directive, which came into force in June 2011.

The Directive requires existing large combustion plants to meet minimum standards for the emissions of toxic air pollutants such as acid gases and particulate matters in a short-term time frame.

The new hospital specializes in surgery, cardiology and orthopedics for both children and adults.

The units work in base load operating mode in the parallel with the local mains grid at full load. For water heating, a combined heat and power (CHP) system was used in conjunction with a local Russian manufacturer, CTM.

FG Wilson – which is headquartered in Northern Ireland – said that in order to ensure the maximum efficiency of natural gas consumption, the power solution operates in ‘tri-generation’ mode, producing not only heat but also cooling. The CHP systems supply exhaust gas-heated water to the chemical absorption chiller for cold water production, meaning the total electric power plant capacity is 2.4 MW and around 2 MW thermal or cold water power.

The project comprised a 320 kV extruded HVDC underground cable and two 1000 MW bipolar circuits along a 64 km land route, with 8.6 km in a purpose-built tunnel across the Pyrenees.

The project links substations in Baixas, near Perpignan in France, and Santa Llogaia, near Figueres in Spain. The cables were manufactured at Prysmian’s facility in Gron in France.

Prysmian said INELFE was classified as a priority project by the EU and was intended to “substantially increase the transmission capacity between France and Spain, thus improving diversification of sources and security of supply, as well as enhancing electricity market integration in southwest Europe.

“For Spain in particular, the project will increase grid system stability and, therefore, facilitate the use of renewable energy,” the company added.

Prysmian has also won a $67m contract for the supply and installation of inter-array cables for an offshore wind farm in the German Baltic Sea.

The contract has been awarded by Iberdrola Renovables Offshore Deutschland, a German subsidiary of Spanish wind farm developer and operator Iberdrola, and is for the Wikinger wind farm, a 350 MW project comprising 70 turbines and an offshore substation.

Prysmian will design, manufacture, install and test 81 km of 33 kV submarine cables in different cross-sections to connect the 70 turbines.

The cables will be produced in Prysmian’s facility in Drammen, Norway, and installation work is scheduled to be complete by the end of 2016.

Mitsubishi Hitachi Power Systems has signed a memorandum of understanding with Uzbek state-operated energy company Uzbekenergo to collaborate on power plant operation and maintenance. MHPS is to provide O&M support and related services for power plants owned by Uzbekenergo. The pact has come out of joint economic talks between Uzbekistan and Japan aimed at promoting bilateral trade and economic development.

MHPS will also provide technical training to Uzbekenergo’s engineers in both Uzbekistan and Japan. The company will hold technical seminars to make Uzbekenergo familiar with the latest technologies and share information relating to O&M for gas turbine combined-cycle power plants.

Uzbekenergo was established in 2001 and meets almost all of Uzbekistan’s power needs via coal, petroleum and natural gas. It generates a total of 48m MW of power per year.

MAN Diesel & Turbo has signed a deal that it has called a “significant project” to deliver a series of gas engines for a new power plant in Gibraltar.

The plant will be built by French EPC contractor Bouygues Energies & Services and will have a capacity of 2×40 MW. It will replace several existing but dated diesel engine plants.

Global head of power sales Howard Barnes said the contract was “a significant project for us” and explained that the Gibraltar government “was looking for reliable generation capacities with a low carbon footprint”.

“The chosen combination of gas and dual-fuel provides both,” he said. “The plant benefits from low CO2 emissions when run on natural gas, and yet offers full fuel flexibility via the three dual-fuel engines.”

The 51/60G is the latest addition to MAN Diesel & Turbo’s family of gas engines. The 14-cylinder version has an electrical power output of 14.3 MW and a single-cycle efficiency of up to 50 per cent, which can be increased to a combined-cycle efficiency of over 52 per cent.

Alstom is to use a new ultraviolet water treatment solution in its hydropower plants.

The company has signed a bilateral agreement with Israeli company Atlantium, which has developed the technology for the power sector.

The technique destroys micro-organisms that proliferate in the auxiliary water circuits of hydropower plants. These invasive aquatic species such as algae, mussels and bacteria pose a serious problem for the hydropower industry, particularly in the US. They can slow the water flow in installations or even block pipes, resulting in costly maintenance.

Atlantium has developed a technique involving ultraviolet rays that is already used in the pharmaceutical and chemical industries. The UV rays, diffused by a lamp embedded in Plexiglas tubes, prevent the invasive species from reproducing.

Atlantium claims that, unlike other traditional water treatments such as chlorine or ozone, UV rays are environmentally friendly and the technique requires little initial investment and is easy to maintain.

Alstom will now utilize the technology in its hydropower plants. Jacques Hardelay, hydro senior vice-president in Alstom’s Renewable Energies sector, said: “With this agreement, Alstom will enable its customers to benefit from an innovative, low-cost, environmentally respectful technique that has already proven itself in other industries and consolidates its position as the leader in services provision in the hydropower market.”