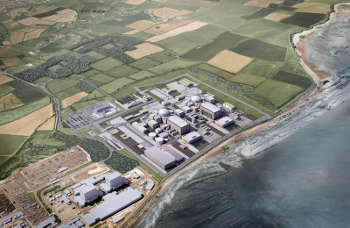 UKà‚ power company EDF Energy has been appointed to lead a project that aims to make power plants more resilient in the face of what some see as growing risk from climate change-related natural disasters.

The three-year, à‚£500,000 ($856,000) project, commissioned and funded by the Energy Technologies Institute (ETI), will aim to understand and catalogue the range of natural hazards that need to be considered during the design of high value energy system assets. One of the project’s outcomes will be a ‘how to’ guide for project engineers.

Other members of the project consortium include engineering consultancy Mott MacDonald, national weather service the Met Office and risk modelling consultancy AIR Worldwide. The choice of EDF as project lead is apropos, as the firm is planning to build new UK nuclear power stations at Hinkley Point (artist’s rendition, pictured) and Sizewell.à‚

Mike Middleton, ETI project strategy manager, said: “This project reflects the ETI’s approach to integration and optimization of the energy system including the contribution from nuclear. Our supporting projects in these areas will contribute to our knowledge of the sector, in which we will seek to build a robust evidence base to help informed deployment decisions to be taken.”

Regis Nhili, EDF’s head of low carbon generation, commented, “Safety is our overriding priority for our nuclear power stations but also for the entire business. This project will contribute to the development of safe high value infrastructures in the UK.”

According to a report issued this month by the World Bank and Japan’s government, more countries need to adopt the integrated approach to disaster risk management implemented by Japan after 2011’s Fukushima accident.

The UK’s Institute of Civil Engineers (ICE) has also cautioned that climate change could increasingly expose the nation’s infrastructure to natural hazards. A recent ICE report focused particularly on flooding, which has been a major problem for the UK. à‚