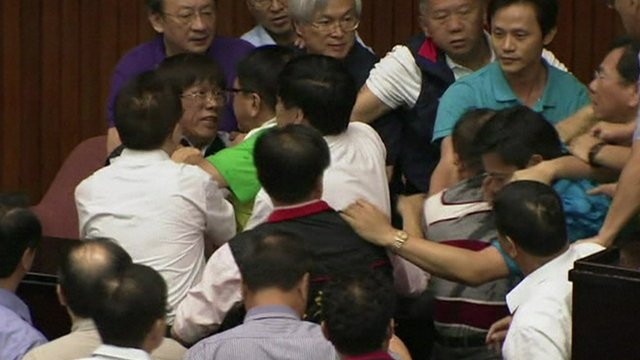 Politicians on rival parties have brawled openly within Taiwan’s parliamentary chambers ahead of a vote on whether to finish a fourth nuclear power plant on the island.

Energy security has become a priority for the ruling Nationalist Party as shortages threaten the densely populated country, while safety and environmental matters are being championed by the opposition Democratic Progressive Party

According to Associated Press, lawmakers exchanged punches and threw water at each other on Friday ahead of an expected vote that would authorize a referendum on the issue.

While many Taiwanese consider nuclear power generation an unacceptable safety risk for the earthquake-prone island, economic analyses suggest disruptive power shortages are inevitable if the fourth plant is not completed.

Construction of Taiwan’s fourth nuclear power plant began in 1997 but was halted while the DPP was in power between 2000 and 2008. If the referendum is passed it could become operational by 2016.