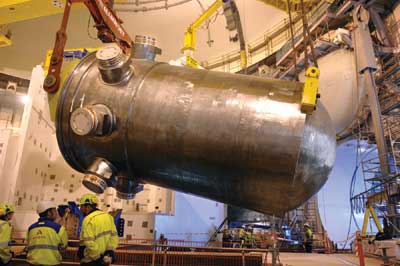 Areva has announced that the troubled Olkiluoto nuclear power plant in Finland will be operational in 2018, nine years later than originally scheduled.

Despite the news of progress, the French nuclear power firm said it, and its partner Siemens will continue to pursue the TVO consortium for compensation associated with losses accrued through delays.

The losses associated with the delays to Olkiluoto are estimated at $5.1bn and the Areva-Siemens partnership is currently in dispute with the Finnish consortium TVO over the assignment of responsibility for delays and compensation for the ill-fated project.

The International Chamber of Trade in Paris is continuing to hear the arbitration case and a ruling is expected on that aspect in 2015.

Meanwhile Areva’s (Euronext:à‚ AREVA) announcement on a date for completion had been awaited by TVO for over a year and they have reacted with surprise to the length of new date, saying that much of the work had been completed and met very high technical standards, and that the extent of the outstanding work to be done was well known.

The statement asserts that construction will be completed in mid-2016, and operational in 2018 and blamed the latest delays on processes for approval of systems for measuring and controlling the facility.

Areva say the new timetable depended on cooperation from TVO “as the owner of the plant”, and that this cooperation was vital, for example, regarding “the review of technical and safety matters” and even more so “during the commissioning phase which is to come”.

The statement said that the consortium of Areva and Siemens “continues to pursue its claims in the arbitration procedure concerning responsibility for the delays to the project with the objective to obtain compensation for the losses incurred.”