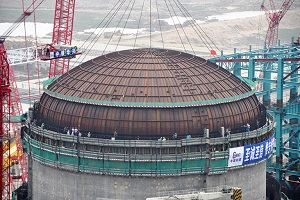 Equipment defects found this week at a Chinese nuclear power plant were reportedly known to the manufacturer since 2012.

Welding defects in a deaerator used in unit 1 of China General Nuclear’s (CGN) 3.5 GW Taishan plant, which were reported on Tuesday, had been flagged in 2012 by an engineer at manufacturer Harbin Boiler, according to a report.

CGN said the deaerator, which removes oxygen and other gases from boiler feedwater, cracked during performance testing due to defective welding and has now been replaced.

This week the Hong Kong Free Press uncovered a 2012 technical report written by a Harbin Boiler engineer in the Chinese journal Guolu zhizao (Boiler Manufacturing). According to the report, because Chinese welding techniques do not follow the procedures required by European-designed deaerators, gaps are left between deaerator parts which need additional work before on-site assembly.

The $8.7bn Taishan plant, located in Guangdong province, is a joint venture between state-owned CGN and France’s EDF, which holds a 30 per cent stake. Construction began in 2009, but progress has been delayed and the planned commissioning date has been pushed back several times, most recently in February. The plant features two Areva-designed European pressurized reactors (EPR), the first to be built in China.

A component supply contract was awarded in 2008 to a consortium composed of China’s Dongfang Electric and France’s Alstom (acquired by GE in 2015), which then subcontracted the manufacturing of the deaerator to Harbin Boiler.

This week’s news triggered a reaction in the UK where the same Areva-designed EPRs are being used for the Hinkley Point C project. The two UK reactors are being built by CGN and EDF.

Another EPR at Finland’s Olkiluoto plant has been under construction since 2005 and has also had its commissioning date pushed back to 2018, as has the EPR at Flamanville in France, work on which began in 2007.