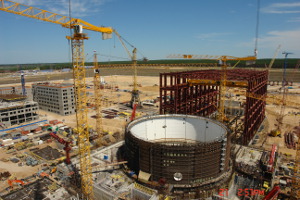 Growth in the nuclear power industry is as much as 25 per cent behind where it should be to avert a global temperature rise, the International Energy Agency (IEA) has said.

While the agency cautioned that no one technology can fix climate change, it called nuclear power a critical element of the portfolio of technologies that together could more than halve 2011’s carbon emissions levels. This scenario, if accomplished by 2050, offers an 80 per cent chance of holding global temperatures at the 2°C target, the IEA said in a report titled Energy Technology Perspectives 2014.

But the agency predicts that installed nuclear capacity in 2025 will be 7-25 per cent below this target. One reason is that modern Generation III light-water reactors take longer to build. The Fukushima accident also created a temporary drop in the world’s capacity when Japan’s 50 operational reactors were halted and eight reactors in Germany were permanently shut down.

Among the wider problems facing the industry is the high capital cost of building a nuclear plant. Among the new types of financing the IEA called “promising” is the Russian ‘build, own, operate’ model, which can offset capital costs with guaranteed long-term electricity prices. The UK has promised a guaranteed rate for electricity generated from its new-build nuclear plants, while export-import bank loans – such as China’s recent $6.5bn loan to Pakistan for the construction of two reactors – and part-equity financing are also promising, the IEA said.

Given this, the agency said the global slowdown is likely to be temporary. Ten new nuclear power plants began construction in 2013, compared with seven in 2012. In total, there are 72 nuclear reactors under construction worldwide as of end 2013.

China, India and Russia are moving ahead with substantial development programmes, while countries such as Belarus and the UAE are building their first reactors. Turkey, Bangladesh, Jordan, Poland, Saudi Arabia and Viet Nam are also pushing forward with nuclear programmes, the US is building new projects after a 30-year hiatus, and the UK and Finland have confirmed new-build plans.

However, the other significant problem for the industry is public acceptance, which varies widely between countries and, as seen in Germany, Belgium and Switzerland which are all phasing out nuclear power, could lead to a further stall in worldwide nuclear growth.