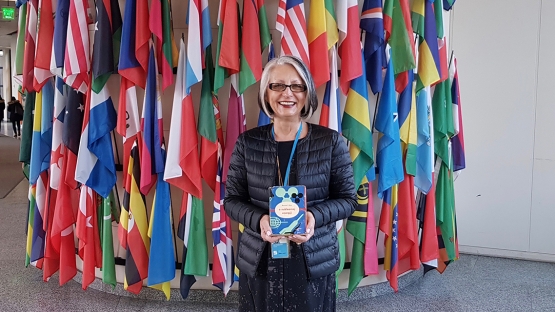 Tatjana Jevremovic, a trailblazing nuclear engineer at the IAEA, has always stood out on the job à¢€” whether for helping her students embrace the challenges of life or developing a seminal neutronics code that, years later, is still used in Japan for relicensing nuclear power plants.

But in an industry famous for being a man’s world, something else has also made her stand out: being a woman.

In 1996, while working as a chief engineer for Nuclear Fuel Industries Ltd in Japan, Jevremovic could be easily spotted from a distance walking with scores of strictly uniformed male colleagues at the company’s factory site near the city of Tokai-Mura. The reason: uniforms for female nuclear engineers did not exist in a company that had never had one.

“The working environment in this field is generally not as enabling for women as it could be,” Jevremovic said. “But nuclear science and technology continue to fascinate me to this dayà¢€”and I would do it all over again.”

As the IAEA marks International Women’s Day on 8 March, the story of Jevremovic’s remarkable career journey, from her native Belgrade to Vienna via Japan and the United States, is both an inspiration for young women considering the nuclear field and a cautionary tale about the potential pitfalls of an industry that, despite efforts to achieve a better gender balance, remains largely dominated by men.

Born in then Yugoslavia, Jevremovic from the very beginning was surrounded by science and math and a passion for learning and culture. Her mother, a professor of linguistics and French, instilled in her a drive to succeed by creating her own opportunities. Her geologist father believed math solved all problems.

“I owe my straightforwardness to him,” said Jevremovic, who joined the IAEA in 2016 and serves as Team Leader for Water Cooled Reactor Technology Development in the Department of Nuclear Energy. “He was not the most patient teacher, but I grew to love math nevertheless.”

Growing up in the Serbian capital, she was always fascinated by books, dictionaries, science magazinesà¢€”anything that imparted knowledge. She wrote poems, started to paint and read voraciously. One day, when she was about 12, she came across a book called On Nuclear Energy by Donald J. Hughes and translated by Dragoslav Popovic, who later became her professor at the University of Belgrade.

“I didn’t know anything about nuclear reactors or nuclear energyà¢€”I had only a vague idea about fission,” she said. “The fact that I did not understand it is why I decided, then and there, to study nuclear engineering and chose it as my profession.”

Her parents were less enthusiastic.

Jevremovic’s father viewed nuclear engineering as a men’s field, and insisted she study geology and become a professor. Given her daughter’s painting talent, her mother thought she would make an outstanding architect.

While she appreciated their intentions, she knew what she wanted. She applied to the Faculty of Electrical Engineering at the University of Belgrade, which that year admitted 80 students. Only 13 ended up graduating, seven of them women, including Jevremovic.

“It was truly a unique generation,” said Senada Avdic, a fellow graduate. “What’s more, all of us (women) stayed in the field and went on to have successful careers as nuclear engineers and distinguished professors.”

Although interested in the medical applications of nuclear technology, Jevremovic decided to go into engineering. She saw it as more ‘hands on’ and could make a better contribution to society.

Rajka Jovetic, who studied with Jevremovic, witnessed this approach first hand. “During my last year of university, I had a baby. After a few weeks, Tatjana appeared with present for the baby and a big notebook for me. She said: ‘Here, everything is in this notebook, just learn it.’ And it really was: notes from lessons, problems with solutions, all important stuff underlined, it was à¢€¦ like the best book ever. I passed the exam and went back to the university thanks to Tatjana,” said Jovetic, who today leads automation for HBIS GROUP Serbia Iron & Steel.

After graduation in 1983, Jevremovic went to work as an associate engineer for a company in hydro and thermal power generation and water management. But while she quickly moved up to project leader, her desire to keep learning was too strong. After gaining a master’s degree, in 1990 she was one of four candidates selected worldwide by the Japanese government to be a PhD fellow at the University of Tokyo.

As chief nuclear engineer at Nuclear Fuel Industries Ltd, she developed a new neutronics code based on Method of Characteristics. Later, with her team, she produced the first detailed plots of neutron flux in reactor cores using no introduced approximations in the code, which is still used in the relicensing of nuclear power plants in Japan.

She named the code ANEMONE, after her favourite flower that grows in Europe, North America and Japan. They have a simple beauty but are complex, like the code itself, she explained. She later redeveloped the code with her students at the University of Utah and Purdue University in the US. She is currently seeking to obtain the code for use in building new learning tools for nuclear professionals in Member States.

Kory Sylvester, Director of the Office of National Security and International Studies at Los Alamos National Laboratory in the United States, met Jevremovic in Tokai-Mura when she was finishing her PhD and he was a first-year graduate student. “It was clear she was a trail blazer, not only as a woman in engineering but also as a person driven by intellectual curiosity and her technical expertise,” Sylvester said. “A free thinker with interests from the history of science to ancient Egyptian cultureà¢€”you were always guaranteed a thoughtful conversation.”

Jevremovic continues to use her technical expertise at the IAEA, where her various tasks include training on reactor simulators, assessing different technologies, and managing workshops and coordinated research projects, such as on methodologies for severe accident analysis in water cooled reactors.

“As a woman, one has to be more careful how to approach colleagues and in particular subordinates,” Jevremovic said. “One way to overcome this is to show by example.”

Besides her work, Jevremovic continues to paint and also writes poetry, which she plans to publish one day.