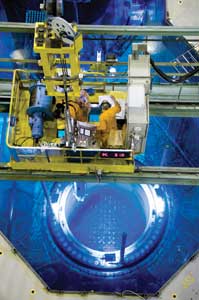 The Swedish government has agreed to bridge the transition to full renewables by 2040 with the construction of 10 new nuclear power reactors.

Old nuclear power plants are to be replaced by the new builds but the Swedish authorities have yet to decide what reactor technology will be deployed.

The agreement between government and opposition parties to go with new nuclear was referred to by Ibrahim Baylan, the country’s energy minister, as “a traditional Swedish compromise.”

Sweden currently gets about 40 per cent of its electricity from nine nuclear reactors. But four of its older reactors are due to close by the end of this decade.

Politicians emphasised that the goal of 100 per cent renewable energy by 2040 did not mean that nuclear plants would be closed then.

“This is a goal, not a cut-off date that would prohibit nuclear power, and it does not mean either the end a closure of nuclear power,” the agreement stated.

The country’s industrial lobbies had been pressing the government not to dispense with nuclear and go with renewables too soon, citing the German Energiewende example, which they say has been done too quickly.

As part of Friday’s deal, Sweden will also phase out from next year a tax on nuclear power that had led power producers to threaten to close down reactors if it was not withdrawn.

“It is excellent news that this tax will be removed, but it should never have been implemented in such a way as to distort the market and put at risk the operation of Sweden’s nuclear power plants, which provide affordable and reliable electricity and form a vital part of its low carbon generation mix.”

The nuclear tax had been repeatedly raised and had reached a level where it was equivalent to more than double the staff costs or more than a third of the operating costs of the plant.à‚