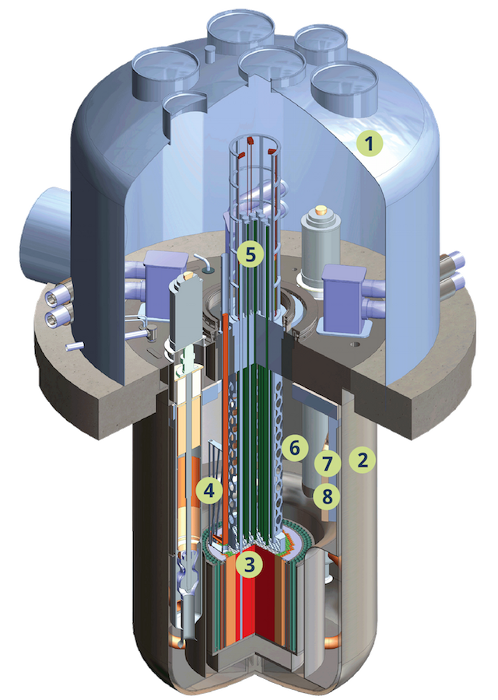 China National Nuclear Corporation (CNNC) has signed a memorandum of understanding with US-based nuclear technology firm TerraPower for development of what will be the world’s first travelling wave nuclear reactor (TWR).

In travelling wave technology, nuclear reactions move through the fuel gradually, without removing the fuel from the reactor‘s core. The uranium through which the wave passes is turned to plutonium.

The reactor design (pictured) chosen for the initial project is liquid sodium-cooled and can use depleted or natural uranium as fuel.

TerraPower says the design provides up to a 50-fold gain in fuel efficiency, eliminates the need for reprocessing and significantly reduces and potentially eliminates the long-term need for enrichment plants.

At the MoU signing in Seattle, Washington this week, Lee McIntire, TerraPower’s CEO, said: “Additional work must be done to define what a possible joint venture may look like, but this memorandum signals that we are well on track.”

According to reports, CNNC may undertake the design and fabrication work on the reactor. Also involved in financing the project is former MicroSoft head Bill Gates, who attended the MoU signing, as well as power technology firm Babcock & Wilcox (B&W), which signed an agreement in 2014 to provide services and programme support including component design and fabrication and fuel fabrication. à‚

McIntire said the project will address the nuclear sector’s “safety, environmental and cost concerns” as the TWR will use cheaper fuel and emit less radioactive waste than existing nuclear power technologies. à‚

TerraPower aims to build the 600 MW demonstration project by the mid-2020s, followed by global commercial deployment of 1150 MW commercial plants.