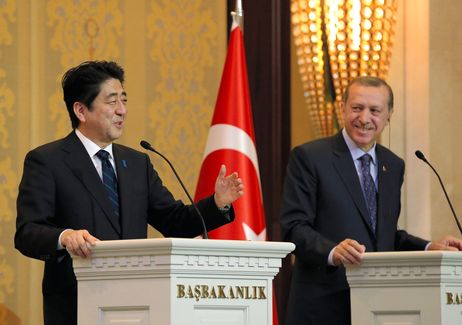 A consortium has signed an agreement with the Turkish government to develop the Sinop nuclear power plant.

The agreement comes in the wake of the deal to develop the Hinkley Point project in the UK, as well as further project announcements in South Africa and Pakistan, evidence of a revival of the nuclear sector worldwide.

The international consortium of which Mitsubishi Heavy Industries is a member reached a broad framework of agreement with the Government of the Republic of Turkey on a commercial agreement relating to the Sinop project, after negotiations that have been under way since Japan acquired preferential negotiating rights to the project in May of this year.

To mark the occasion, Japanese Prime Minister Shinzo Abe, who is currently on a visit to Turkey, and Turkish Prime Minister Recep Tayyip Erdogan signed a joint declaration on cooperation between Japan and Turkey in the fields of nuclear energy and technology.

The Sinop project calls for the construction of four nuclear power plants (NPPs) in the Sinop area of the Black Sea coast. The commercial agreement at hand is a Host Government Agreement (HGA) delineating such matters as the scope of cooperation for project implementation and a feasibility study framework. Conclusion of a formal agreement between the consortium and the Government of Turkey is expected after authorization from the Grand National Assembly of Turkey.

Once the feasibility study has been completed, the international consortium will draw up specific project terms.

Plans for the Sinop project call for the adoption of the “ATMEA1,” a state-of-the-art nuclear reactor developed by ATMEA, a joint venture between MHI and France’s AREVA.

Meanwhile new US energy secretary Ernest Moniz said on a visit to Beijing on Wednesday that the US is committed to working with China on the development of new nuclear reactors in both countries and will also encourage joint bids for projects elsewhere.

Moniz said the US.-based Westinghouse, one of the world’s leading nuclear firms, was prepared to bid for reactor tenders in Britain with the China National Nuclear Corporation (CNNC) and the State Nuclear Power Technology Company (SNPTC).

“There is an explicit collaboration with Westinghouse…and the issue of joining together in terms of a British tender is part of that.”

China aims to raise its total nuclear capacity to 58 GW by 2020, up from just 12.6 GW now, and foreign reactor builders like Westinghouse and France’s Areva SA have been competing fiercely for new projects.

Westinghouse, owned by Japan’s Toshiba, is working on the design and construction of its own third-generation AP1000 reactor with SNPTC, with the world’s first ever unit due to go into operation in China by the end of this year. The AP1000 serves as the model for China’s own homegrown CAP1400 design following a 2006 technology transfer agreement.

“What we are seeing is a very close relationship with SNPTC in the design and construction of generation three technology, and it is fundamentally the same generation three technology that is being applied to four plants in China right now and to four plants in the southeastern United States,” said Moniz at a press conference in the Chinese capital.

“Westinghouse and SNPTC are collaborating in developing both the U.S. and the Chinese supply chains for these nuclear projects. SNPTC plays a lead role in China and an analogous role in the United States as an EPC contractor, and that will continue.”