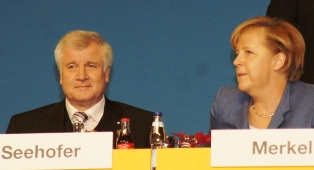 German chancellor Angela Merkel has dismissed a call by Bavarian state premier and CSU leader Horst Seehofer to place a moratorium on the construction of major high-voltage direct-current (HVDC) transmission lines slated to cross Germany in coming years.
Troubled by dissent from the public towards the erection of pylons through his state, Mr Seehofer had made his comments last week, in an act being seen as motivated by forthcoming local elections in the southern German state.

Mrs Merkel was quoted by AFP as saying during a weekend meeting of her Christian Democratic Party (CDU), “We’re all in agreement that there will be HVDC lines.”

She went on to stress that German state premiers overwhelmingly agreed last year to plans to build the transmission lines that are aiming to transport energy from coastal and offshore wind parks in the north to industrial centres in southern Germany, where several nuclear plants are scheduled to be switched iff.

While plans for the HVDC lines will continuously be re-examined, it is very likely that the outcome of the verification will be that plans remain unaltered, Merkel said. A moratorium certainly is no answer to the lack in approval among the population, she stressed.

“We can’t start only in 2018 to talk about the plan for HVDC lines,” Merkel said.

Southern German states such as Bavaria or Baden-Württemberg are still dependent on nuclear power, which is being phased out, for their energy supply, while transmission capacity from the windy North of the country remains insufficient.