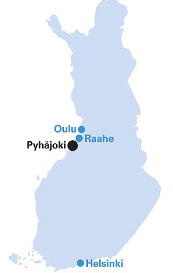 The project aims to build the 1200 MW Hanhikivi 1 plant at Pyhäjoki (pictured) on the shore of the Baltic Sea, but its progress had been stalled since June after the government set a goal of at least 60 per cent funding from within the EU, to be raised by this week.

Russia’s state-owned nuclear firm Rosatom, which owns a 34 per cent stake in the project, had offered to provide further funds, but the offer was rejected. In addition, the government removed Croatian company Migrit Solarna Energija from the list of EU-based investors, reportedly arguing that it was funded by Russia.

This week Fennovoima announced that three Finnish firms will either take on new shares or increase their existing stakes in the project. Utility Fortum is to take a 6.6 per cent stake, construction firm SRV will purchase a 1.8 per cent stake and serve as project manager, and real estate developer Outokumpu will increase its holding from 12.3 per cent to 14.1 per cent.

“Taking into account the latest financial commitments, domestic ownership of Fennovoima now stands at 65.1 per cent and meets the ownership conditions set by the Finnish government and parliament,” Fennovoima said in a statement.

Meanwhile, Prime Minister Juha Sipilä has said that it is unlikely that his government will approve any new nuclear power plants after the Fennovoima project, according to a report by regional daily newspaper Keskisuomalainen. “There are no applications or any discussions ongoing about nuclear power permits,” Sipilä was quoted as saying.

Finland’s energy policy is currently focused on the prospects for bioenergy.