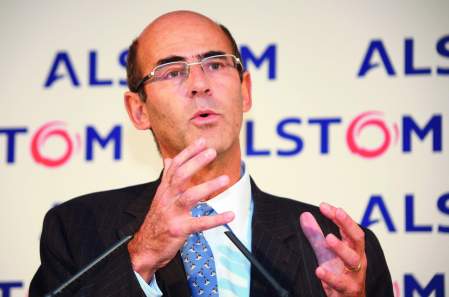 The head of Alstom told the French National Assembly on Tuesday that a decision needs to be made soon on the $17bn bid for the business from GE, as delay is hurting the business.

Chief Executive Officer Patrick Kron wants the government to support a decision to back the GE bid and said uncertainty about his company’s future is making it difficult to win orders.

“GE’s offer is an excellent option,” Kron told France‘s National Assembly yesterday. The bid meets government concerns about France’s energy independence, local decision making and potential job cuts as there are almost no overlaps between the companies’ operations, he said.

Kron’s main adversary in seeing the deal through is French Economy Minister Arnaud Montebourg, who yesterday reiterated a preference for Siemens AG (SIE)‘s proposal to swap most of its rail business for Alstom’s energy assets in a deal that would form two leading European energy and rail companies. While Kron said he would examine any rival offer, he told the lawmakers that he wants a swift solution.

“Today, it’s not easy to get orders,” the executive said. “This current period full of uncertainties mustn’t last for a long time.”

Montebourg succeeded in pushing through legislation last week strengthening the government’s ability to control deals for key industries that are seen as linked to national economic security.

GE is in early-stage talks with state-controlled nuclear group Areva SA (AREVA) and other French companies about asset sales or partnerships as it awaits direction from the French government on whether it must sell assets to get the deal done, people familiar with the matter said last week. GE is exploring concessions, including entering ventures in areas from nuclear power to wind-turbines to rail signaling, they said.