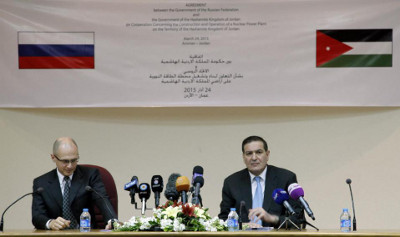 Jordan and Russia this week signed a $10bn deal to build Jordan’s first nuclear power plant, with a planned capacity of 2 GW.

The plant, to be built by Russian state-owned nuclear company Rosatom, is to be located at Amra in Jordan’s northern region and the first of its two units is planned to come online by 2022.

Under the terms of the agreement, Russia will shoulder 49 per cent of the project’s costs and Jordan 51 per cent. Rosatom will initially undertake a feasibility study, site evaluation and environmental impact assessment. In addition, Jordan will purchase reactor fuel from Rosatom for a 10-year period.

“The Russian technology we chose in a very competitive process suits Jordan’s needs in terms of power generation and the ability to produce electricity at very competitive prices,” Khaled Toukan (pictured, right), chair of the Jordan Atomic Energy Commission (JAEC), was quoted as saying.

Rosatom CEO Sergey Kiriyenko (pictured, left) noted that the project “is the embodiment of a strategic partnership”. Last month Russia signed a similar strategic deal with Egypt for construction of that nation’s first nuclear power plant.

Jordan imports almost all of its power and is facing demand growth of over 7 per cent each year.