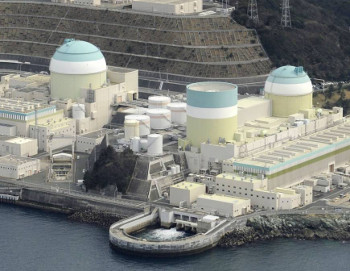 What has been termed a ‘super typhoon’ is battering Japan, and analysts say it could potentially damage three of the nation’s nuclear power plants.

According to the Japan Meteorological Agency, Typhoon Neoguri is currently pounding Okinawa and is expected to reach the mainland mid-week, bringing lashing winds and torrential rain. The storm will likely hit two nuclear power plants on the main island of Kyushu and could also affect a third plant on Shikoku island, according to reports.

All three plants have been halted for safety. A spokeswoman at Kyushu Electric Power Co told the Reuters news agency that the company had no specific plans regarding Typhoon Neoguri, but that it does have an ongoing strategy for safeguarding nuclear plants during severe weather.

The Sendai plant was commissioned in 1985 and features two 890 MW pressurized water reactors.  According to stress tests performed in 2011, the reactors should be able to withstand 13-15 metre high tsunami waves.

The Genkai plant features two 559 MW pressurized water reactors, commissioned in 1975 and 1980, and two 1180 MW reactors brought online in 1993 and 1996. Unit 4 was restarted in November 2011, the first Japanese reactor to be restarted after the post-Fukushima nationwide shutdown.

Genkai unit 1 is scheduled to be decommissioned in 2015, followed by the rest of the plant at an unspecified later date.

On Shikoku island, the Ikata NPP (pictured) features two 566 MW pressurized water reactors, brought online in 1977 and 1981, and one 890 MW reactor commissioned in 1994. A coolant leak was discovered in unit 3 in 2004, and was subsequently repaired.

Shikoku Electric Power Co, the plant’s owner, has applied to restart unit 3 and the application is under review by the regulator. The plant’s tornado and fire protection, which were initially deemed inadequate by the regulator, have been improved since 2013.