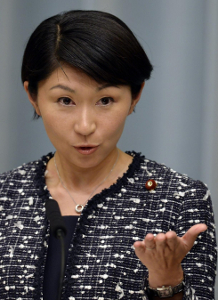 Japan’s first female economy, trade and industry minister, Yuko Obuchi, is set to be a lightning rod for the nation’s nuclear debate.

Appointed earlier this month by Prime Minister Shinzo Abe, Obuchi (pictured) is to oversee the government’s plan to restart Japan’s 48 sidelined nuclear reactors. Analysts predict that she will face opposition especially from women, a large percentage of whom reportedly oppose the restarts.

“I, too, am raising children,” Obuchi said shortly after her appointment. “If people say they are worried, I think it is only natural. If you are a mother, I think it is a kind of feeling that everyone has. The central government must offer a full explanation to these sentiments.”

According to newspaper The Japan Times, some commentators believe Abe chose Obuchi, a former finance minister and daughter of late prime minister Keizo Obuchi, to be “an acceptable face” of the restart programme. The paper quoted Kazue Suzuki, a nuclear campaigner at Greenpeace Japan, as saying that naming a young mother to the job (Obuchi is 40 and has two children aged four and six) was “a cunning move by Abe”. However, others believe that Obuchi was appointed simply because she is a rising star in Abe’s Liberal Democratic Party.

One of Obuchi’s first acts after taking office was a visit to the Fukushima-Daiichi nuclear power plant. During her visit she told workers that “for Japan’s future and Fukushima’s reconstruction, the nation as a whole must follow through the decommissioning work as well as the task to control contaminated water, no matter what.”

At her inauguration ceremony, Obuchi said: “We will restart (nuclear power plants) by making safety our priority.” She has said the government must foster the “understanding of hosting communities” living near the plants.

Regarding a possible permanent shutdown of the nation’s older reactors, Obuchi has said that plant operators should make this decision, but that government would help with the decommissioning in order to smooth the process.