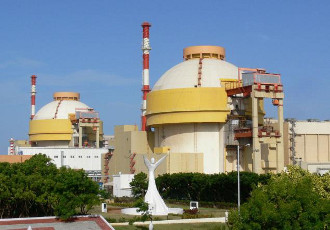 The Kudankulam-I reactor is India’s twenty-first, and the nation’s first pressurized water reactor in the light water reactor category, said site director R S Sundar. The project was undertaken with technical co-operation from the Russian Federation.

It is India’s first reactor to generate this amount of power, with the next-largest rated at 540 MWe and the largest thermal generation unit at 800 MW. Two 700 MWe pressurized heavy water reactors are under construction.

Nuclear Power Corporation of India Ltd (NPCIL), the plant’s owner, said it plans to run the reactor for an unspecified amount of time before stopping it to conduct tests mandated by the Atomic Energy Regulatory Board (AERB).

Saturday’s power generation milestone represents the end of a lengthy process that began in 2002 with the project’s “first pour of concrete”, with commissioning originally planned for 2007. But significant delays arose when component supplies were delayed, additional safety measures were required after the Fukushima nuclear accident, and anti-nuclear activist group the People’s Movement Against Nuclear Energy launched a two-year protest.

Unit 1 attained criticality in July 2013, then underwent a series of AERB tests as well as tests by Russian state-owned equipment and service provider Atomstroyexport. Rampup went from 500 MWe to 750 MWe before arriving at maximum power.